"The Menace from Andromeda" by Schachner and Zagat, part 1

It's been way too long since the Johnny Pez blog revived a lost-and-forgotten science fiction story from the Gernsback Era. Starting today, therefore, we will be posting "The Menace from Andromeda" by Nat Schachner and Arthur Leo Zagat, from the April 1931 issue of Amazing Stories.

Schachner and Zagat were a pair of lawyers who decided to start writing pulp fiction together. Their writing partnership only lasted two years, after which both continued to write pulp fiction separately. Schachner eventually branched out to writing historical novels and biographies until his death in 1955, while Zagat remained a pulp writer until his own death in 1949.

"The Menace from Andromeda" was the pair's third published story, and their first appearance in Amazing. In the eighty years since its initial magazine publication, it has never been reprinted. As always, the story will be posted in a blog-friendly multi-part format. And now, without further ado, part 1 of: 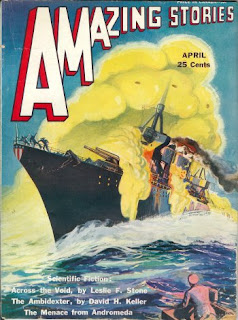 The Menace from Andromeda
by Nat Schachner and Arthur Leo Zagat


With a puzzled frown, Donald Standish looked up from the photographic plates in front of him to the patch of dark blue heaven visible through the half-opened dome of the Mt. Wilson observatory. There floated the enigmatic nebula of Andromeda -- the huge telescope probing directly toward it -- as if to pluck out the very secret of its being. He arose, and paced the confines of the huge room. Under thirty, clean cut in features, he had already earned an enviable reputation as an astronomer, which had won him a coveted place in the world famous observatory. From the very beginning, the great nebula had exercised a peculiar fascination over him. In some inexplicable way Standish had always felt that there lay the secret of the universe waiting for him in the rôle of a Perseus to deliver and bring forth.

In truth, many other contemplative observers had speculated about that faint, dusty patch of light sprawled athwart the enchained and enchanted body of the legendary daughter of Cepheus and Cassiopeia. For centuries men had pondered in vain, seeking the nature of the faint light-cloud which so persistently evaded their probings. It was not until recently, with the great advance in the manufacture and use of precision instruments and telephoto lenses, that the astounding truth had been revealed to startled astronomers -- this faint glimmer in the skies is a great island universe of stars; far beyond the confines of our own galaxy -- millions on millions of suns and attendant planets, careening through the outermost reaches of space-time, so inconceivably remote that a ray of light traveling 186,000 miles per second would take nearly a million years to reach the earth.

Standish turned once more to the sheaf of photographs. Yes -- there was no doubt about it, the faint pin-prick of light labeled on the sky charts as 12478, which he had himself named Alcoreth, showed an unmistakable increase in brightness in this most recent of his photographs.

For over a year, on every clear night, he had photographed the great nebula. The minute pin-pricks of light, representing huge stars, had been laboriously ticketed and compared. This queer behavior on the part of Alcoreth, hitherto a placid, ordinary star, aroused his interest.

"Something interesting happening to the constellation of that old lady," Donald remarked to himself, meditatively stroking his chin. "I'd better turn the prisms on her and see what's going on in her innards to account for it."

Deftly he adjusted the great spectroscope, and swung it on the errant orb. As he gazed, a startled "Whew" escaped him. These were not the spectral lines and bands customarily associated with hot gaseous stars in eruption.

"This is becoming more interesting -- better verify it," he thought. Quickly he took out his series of comparison spectra. None of them checked with this spectrum.

Again he arose, and paced the room. This was evidently not a burning sun. Apparently it was a relatively cold mass. What then was it? Was it shining by reflected light? But, he argued with himself, there was no sun within billions of miles to produce such a vast outpouring of reflected light. There must be some other cause for its luminosity. Excitedly Standish paced about. Luminescence -- phosphorescence. This must be a world composed of some radio-active mineral! He strode back to the spectroscope. No, these were not the characteristic lines of any radio-active mineral known to science. Again he took up his restless pacing. The word phosphorescence brought to his mind pictures of the fields at night alive with the darting sparks of fireflies -- of the forests, and the glow of rotting fungus and decaying wood -- of the tropic seas under the Southern Cross, criss-crossed with pallid witch-fires.

He stopped in his tracks. By George, that was it! Life forms -- protoplasm -- under certain conditions would become strongly luminescent. But no -- that was too fantastic for serious consideration. And yet -- and yet. Try as he would to dismiss the thought from his mind, it occurred again and again, until it obsessed him. He must check it, and that this very minute.

In the course of his researches, Standish had discovered that by causing the light of luminiferous protoplasm to pass through a series of gases, the spectroscope was capable of resolving the constituent elements. As yet the process was a guarded secret, but the material was at hand.

With trembling hands the astronomer set up four thin walled transparent chambers, put into each a definite quantity of a rare gas -- different for each chamber -- attached them in series to the great spectroscope in such a fashion that the light from Alcoreth passed through them, before reaching the prisms that would cause it to yield up its secret.

"What an idiot I am to waste my time on such a crazy idea!" he scoffed aloud, at the same time looking around guiltily. "It's damn foolish, all right, but what's the odds. Let's take a look-see." He inserted a comparison spectrograph of the organic elements, carbon, hydrogen, nitrogen, oxygen, sulphur and phosphorus -- the essentials of life as we know it on this planet.

With elaborate carelessness, hardly masking his inner trepidation, he gazed into the aperture. The spectrum appeared. A quick look, a longer one, then a concentrated stare -- a feverish scribbling of calculations -- then he arose with a mighty shout, that echoed from the great white dome. "Eureka, I have found it!" The cry of Archimedes on making his famous discovery. The impossible was true. The life elements were all present on that distant star, and what was infinitely more, its spectrum showed the peculiar arrangement of lines and bands which his research had shown was invariably associated with living protoplasm.

His immediate impulse was to broadcast his discovery to the scientific world. But then a thought sobered him. So fantastic a theory would never be accepted unless supported by impregnable proof. Premature publication, and he would become a laughing-stock. No, he must wait until his spectroscopic research was perfected. In the meantime, keep on observing this strange new world.

For three weeks he took innumerable photographs, barely pausing for sleep and food. The star increased in brightness, then tiny streamers shot forth intermittently, then slowly it waned. From a fifteenth magnitude star it passed gradually down the scale, till finally a last plate failed to show any trace of it. Alcoreth was gone, and with her, Standish's hope of everlasting fame.

The astronomer was in despair. How now could he convince the scoffers that he had witnessed the impossible -- a world of living protoplasm! His proof was gone.

Yet, when he pondered over it -- it did not seem impossible. Life -- protoplasm -- was only a particular combination of five or six elements. These elements are found throughout the universe. Was it inherently impossible, or even wildly improbable, for these elements to combine in some other world to form living matter, just as on our own earth various elements combined to form the rocks that constitute the structure of the world?

So Standish argued, and thought wistfully of Douglas Cameron, his chum of college days, now a research worker on cancer in an isolated laboratory in the fastnesses of Colorado. He thought of Douglas and his sister and assistant Mary. Those two would listen to his tale of discovery. How he wished Mary was with him now! Well, another month and she would be with him always, his wife and helpmate. He could see her now, the laughing eyes, tilted nose, puckered lips. She was fair to look upon, his Mary, but wiry and strong, and behind that clear brow was a brain which made her fit sister to one scientist and wife to another.

"Well, to work again," he sighed, and continued the search for living worlds.