A couple months back, in a fit of Sobel Wiki-inspired madness, I created a blog post in which I speculated on what sort of national flags the United States of Mexico and the Confederation of North America might have wound up with. I came to the conclusion that after the American bid for independence failed, the British colonies would return to the pre-rebellion practice of flying the British Red Ensign: 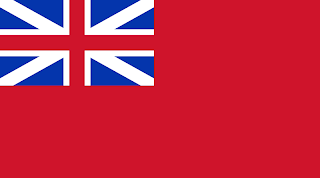 This would continue until the drafting of the Second Britannic Design in 1842, at which time a wave of North American nationalism would lead to the adoption of a Coat of Arms for the C.N.A., and of a version of the Red Ensign incorporating that coat of arms, in much the way that Canada did in our own history after the confederation of 1867. In my original post, I didn't go to the trouble of creating a hypothetical C.N.A. Coat of Arms, since I was hoping one of my more vexillology-oriented readers would be inspired to do so. Two months later, that hasn't happened, so I've decided to take matters into my own hands. Hence, my own version of the C.N.A. flag: 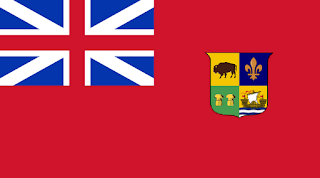 This raises the question of what happens to the North American flag and Coat of Arms after Quebec devolves to associated status in 1889. One answer is that the fleur-de-lis is replaced by a new symbol, like so: 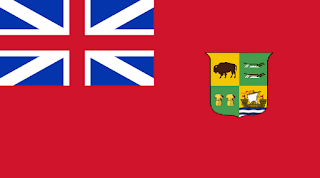 The devolution of Quebec was the result of a plebiscite held by a radical new political party, the People's Coalition. Sobel indicates more than once the Coalition's ties with the rebellion of the 1770s: the original founders of the Coalition in the Southern Confederation had called their platform the Norfolk Resolves in a deliberate echo of the Suffolk Resolves of 1775; and the Coalition held its 1883 national convention in Boston, something Sobel suggests was meant to indicate their relationship with the rebels of the 1770s.

After gaining power in 1888, the Coalition under its leader Ezra Gallivan sought to distance the C.N.A. from Great Britain, and it might well be that part of that effort was the adoption of a new national flag omitting the Union Jack. What would such a Coalition-inspired flag look like? Well, given the new party's ties to the rebels of 1775, you might get something like this: 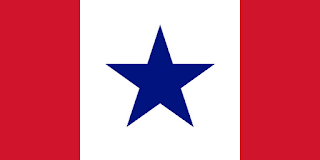 It's not the Stars and Stripes of the North American Rebellion, but the echoes are unmistakeable, which is what you would expect of Gallivan, a member of the Coalition's moderate wing, but a confirmed isolationist nonetheless.
Posted by Johnny Pez at 11/24/2012 10:33:00 PM