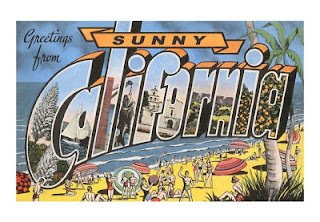 This month's featured article at the Sobel Wiki is on California, the wealthiest and most populous of the United States of Mexico.

Sobel's California is rather larger than ours, since it also includes our world's Baja Peninsula, most of our world's Oregon, and about half of our world's Washington state. The major difference between Sobel's California and ours is that his gave birth to Kramer Associates, the One Big Zaibatsu of the Sobel Timeline. Bernard Kramer, the founder of K.A., was a firm believer in the need to keep as many politicians as possible beholden to him, a tradition that was faithfully followed by all of his successors. Kramer's money bought Omar Kinkaid a Senate seat, then two terms as President of the U.S.M. When Kinkaid turned against K.A., he was assassinated. Two years later, Bernard Kramer decided that buying politicians was too much trouble, so he installed his business ally Benito Hermión as dictator. After that, as Sobel records, California was basically a fief of Kramer Associates.

Twenty years of dictatorship ended when Kramer's successor, Diego Cortez y Catalán, decided that Hermión was getting out of hand, so he had the dictator deposed and restored republican government, presumably because elected officials who get out of hand are easier to get rid of than dictators. By the 1930s K.A. President John Jackson decided the Mexican government was too hard to handle, so he moved the company to the Philippines, which had a more easily influenced government. Sixteen years later, Jackson's successor, Carl Salazar, relocated the company to Taiwan, another country with a pliable government.

Meanwhile, California continued to grow and prosper, and though it accounted for a quarter of the country's voters, its diverse population kept it from becoming the arbiter of Mexican politics. Albert Ullman was the last Californian to receive a major party's presidential nomination, and that was in 1914. Since the departure of K.A., California has been just another state of the U.S.M., sharing in the rest of the country's triumphs and disappointments.
Posted by Johnny Pez at 10/02/2015 05:24:00 AM 1 comment: