Scorpions in a Bottle: The Greene Expedition 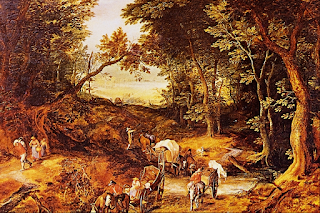 The latest section of Scorpions in a Bottle follows the former American rebels as they make the dangerous trek from Virginia to Spanish Texas that would later be immortalized as the Wilderness Walk. This section follows on from the account of the Loyalist reaction of 1778-79.


The southern expedition was more successful. Under the command of Nathanael Greene of Rhode Island, this expedition gathered near Williamsburg in the spring of 1780, intending to travel overland to the province of Tejas in New Spain. Three quarters of its members were from the Southern colonies, and included a number of slaveowners who brought their Negro slaves with them. This led to some friction with members from the northern colonies, who believed that the overland route would be dangerous enough without the added difficulty of keeping watch on hundreds of slaves to prevent their escape en route. Governor Bland attempted to persuade General Clinton to forbid the Greene expedition to remove any Negro slaves from the colonies -- not out of humanitarianism, but for fear that the expedition’s slaves would escape their control and join Marion’s raiders in the western hills. Despite these efforts, the Greene expedition included roughly 500 slaves, along with some 3,000 to 4,000 white colonists. [1]

Greene’s reasons for taking the more difficult overland route, rather than sailing to New Orleans or the mouth of the San Antonio River, were twofold. Firstly, he intended to augment the expedition’s numbers by traveling through the Southern colonies and recruiting disaffected former rebels. Secondly, he hoped to blaze a trail through the wilderness that would allow later settlers to follow him to the new settlement. The first aim proved successful: uncertainty concerning the numbers of the Greene expedition are due mainly to colonists who joined after the departure from Williamsburg, who may have numbered anywhere from 1,000 to 3,000 people. The second aim was, on the whole, a failure. The difficulties encountered by Greene’s expedition made the overland route unpopular, and practically all colonial emigration to Tejas after 1782 arrived via ship.

Greene’s original plan would have seen the expedition travel by road from Williamsburg to St. Augustine, Florida before traveling west along the coast of the Gulf of Mexico to New Orleans. However, news of the British government’s decision to cede Florida to Spain forced the expedition’s leaders to revise their plans on the fly, and the decision was made in July to strike west into North Carolina. The expedition reached Kings Mountain, South Carolina, and paused to reorganize, before continuing west. However, by September a combination of unfamiliar terrain and skirmishes with the local Indian tribes made it clear that they would be unable to reach the Gulf Coast by winter, and the expedition turned back to winter in Charlotte, North Carolina.

Setting forth again in April 1781, the Greene expedition was able to travel west after engaging Indian guides among the Cherokee. The expedition struck the Mississippi River in August, then traveled downstream to Baton Rouge, which they reached in early September. The journey was difficult, and almost half the people on the expedition had either turned back, or died from disease. Baton Rouge had been under Spanish rule since the North ministry ceded the Floridas in 1780, and most members of the expedition wanted to settle there permanently. Had they done so, the subsequent history of the North American continent would have been very different. However, the arrival in November of a second party of 800 former rebels, who had traveled by ship from Charles Town, South Carolina, convinced the surviving members of the Greene expedition to press on to Spanish Tejas in the spring. [2]

During their stay in Baton Rouge, the leaders of the Greene expedition came into contact with the Acadians, French settlers from Nova Scotia who had been forced from their homes during and after the Seven Years’ War. Many Acadians feared (presciently, as it proved) that the aggressive, land-hungry British colonists would soon expand into Spanish Louisiana, and they looked with interest on the expedition’s plans to establish a new settlement in Tejas. As a result, when the Greene expedition resumed its journey in April 1782, it was accompanied by some 200 Acadians and other Francophone residents of Louisiana.

For decades, French settlers in Louisiana had engaged in illegal smuggling with Spanish colonists in Tejas. These contacts between French and Spanish colonists proved fortunate for the new arrivals, since it allowed them to establish friendly relations with the Spanish settlers upon their arrival in Tejas in the summer of 1782. Particular assistance was provided by Father Jean Baptistee de Gray, an Acadian priest who had been expelled from Nova Scotia during the Seven Years’ War. With de Gray’s assistance, the exiled Americans were granted permission by Governor Domingo Cabello y Robles to establish several settlements on the Trinity River, including Jefferson City, Arnold, and Henrytown, the latter a port at the mouth of the Trinity River. The Acadians established a separate settlement called Lafayette near the Spanish settlement of Nacogdoches. By November 1782, the new settlements had been well-established, and the American exiles set to work creating a new society in a strange land. [3]

----
1. In his account of the Greene expedition, Hamilton claimed that the Negro slaves were never meant to be transported to the new settlement, but were supposed to be sold en route to help finance the journey. Farewell to Change, p. 117. 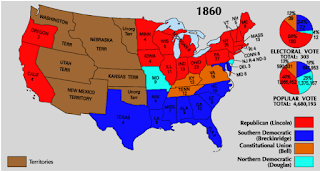 Republican insiders are desperate to keep Donald Trump from becoming their presidential nominee. At the moment, their efforts are focused on keeping Trump from winning an outright majority of delegates. If they succeed, that would put us in the fabled realm of the "brokered convention", where behind-the-scenes dealmaking would allow the Republicans to deny Trump the nomination and award it instead to a mutually agreeable compromise candidate. The model is the 1920 Republican convention, which was deadlocked among several candidates until Warren G. Harding emerged as an acceptable compromise candidate, receiving the nomination.

The trouble with the "brokered convention" scenario is that it doesn't always work. The most notorious example is the 1860 Democratic Convention. In 1860 the slavery issue haunted American politics like a vast, scary, haunty thing. It had already broken up the Whig Party, and now it was the Democrats' turn. At their convention in Charleston in April, proslavery Southern Democrats were adamantly opposed to the frontrunner, Illinois Senator Stephen A. Douglas, and they successfully blocked his nomination. However, the proslavery faction were not strong enough to put forward a candidate of their own, and neither side could agree on a compromise candidate. After 57 ballots, the convention adjourned without nominating a candidate.

Six weeks later, the Democrats convened again in Baltimore. This time, the proslavery delegates walked out, and the remaining delegates nominated Douglas. The proslavery delegates held their own convention, where they nominated Vice-President John Breckenridge. Thus, there were two different Democratic candidates, splitting the vote and allowing the Republican candidate, Abraham Lincoln, to win the general election.

Now the Republican establishment is faced with not one, but two outsider insurgent candidates, Trump and Texas Senator Ted "Backpfeifengesicht" Cruz, both of whom are running ahead of their own preferred candidate, Florida Senator Marco "Empty Suit" Rubio. Neither Trump nor Cruz is likely to back down and support an establishment candidate, or each other for that matter. So the Republicans may well find themselves facing their own deadlocked convention.

The result is chaos on an epic scale. Which candidate ends up on which state ballot? It'll be up to each state's Secretary of State whether to put one, two, or all three Republicans on the general election ballot. If Trump isn't on, say, the Pennsylvania ballot, then a lot of Trump supporters will stay home on election day, which would be very bad news for downticket Republicans, especially for incumbent U.S. Senator Pat Toomey's re-election. Multiply that by 50, and you get a nightmare scenario for the Republicans. Losing to Hillary Clinton would be the least of their problems; they might well lose control of both houses of Congress and more state legislative seats than you can shake a short vulgarian finger at.

I'm not saying this is what's going to happen, but I do believe that it might happen, if the Republicans get their "brokered" convention.

Sobel Wiki: And Close the Door 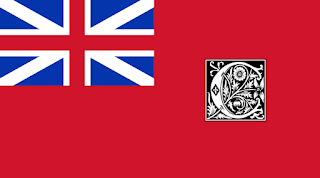 This month's featured article at the Sobel Wiki is on the Conservative Party, one of the two original major parties in the Confederation of North America.

In our own history, British politics in the 19th century was dominated by two parties, the Conservatives and the Liberals, both the product of mergers of earlier parties. This has led to the use of "conservative" and "liberal" to describe the dominant political ideologies of modern developed nations. This also influenced the development of political parties in British Commonwealth nations. For instance, when Canada was confederated in 1867, the names and ideologies of the British parties were adopted by Canadian politicians.

Thus, when Sobel described the formation of political parties in the C.N.A. in the early 19th century, they were called the Conservatives and the Liberals. This is actually an anachronism: the name Conservative wasn't adopted in the U.K. until 1834, and Liberal wasn't adopted until 1859. It may be that the names came into use in the Sobel Timeline Britain around the same time as they did in the C.N.A. Sobel mentions a Liberal government in Britain falling in 1835 and being replaced by a Reform-Conservative coalition. It appears that the economic shock of the late 1830s disrupted British politics to the point where these names fell out of use, and the older names Whig and Tory were revived. British politics in the Sobel Timeline was still dominated by the Whig and Tory Parties in the 20th century.

As for the C.N.A.'s Conservative Party, it and its rival Liberal Party appear as separate confederation-level parties in the 1810s and 1820s, during the period of the First Britannic Design, when the C.N.A. is a loose collection of semi-autonomous British dominions. The same economic shock that disrupts the British party system in the late 1830s unleashes various forms of chaos on the confederations of North America. It is in response to this chaos that the North American parties lead the push for political centralization that results in the Second Britannic Design of 1842.

Under the first forty years of the Second Design, the Conservatives and Liberals take turns controlling the new national government, both becoming corrupt. The corrupt equilibrium is upset in the late 1860s when the Conservatives push through electoral reforms expanding the franchise and reapportioning Grand Council seats. The reforms are meant to solidify Conservative rule, but they end up allowing a populist third party, the People's Coalition, to appear and flourish. The Coalition's gains come, ironically, at the expense of the Conservatives -- by 1883 the Coalition has displaced the Conservative Party as the official opposition, and by 1893 the Conservatives have ceased to play a role in national politics. By 1903 the party has dwindled to the point where it can no longer nominate a candidate for governor-general, and it effectively shuts down.
Posted by Johnny Pez at 3/05/2016 06:30:00 PM 1 comment: