I, Robot: To Preserve by Mickey Zucker Reichert 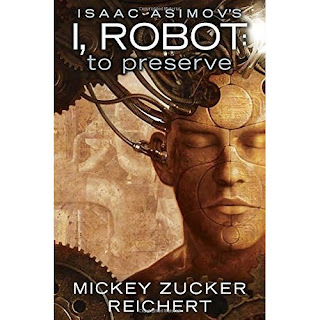 Back in February, fantasy author Mickey Zucker Reichert published the third book in her I, Robot prequel trilogy, I, Robot: To Preserve. The books turned out to be not so much a prequel as a reboot of Isaac Asimov's positronic robot series. As I noted in my review of the first book, I, Robot: To Protect, Reichert shifted the time frame of Asimov's original stories by 27 years, so that Susan Calvin's birth takes place in 2009 rather than 1982. This allows Reichert to set her trilogy in our own future rather than in an alternate present, since under Asimov's original chronology To Protect would have taken place in the year 2008.

I liked To Protect. Despite the changes Reichert made to Susan Calvin and to the background of the positronic robot series, she maintained Asimov's focus on the interplay between the robots who obey the Three Laws of Robotics and a human race that has no built-in laws of behavior. Unfortunately, in her second book, I, Robot: To Obey, Reichert shifted the focus away from the Three Laws so that she could write a violent, action-packed thriller centered on a ridiculous MacGuffin. The final book, sadly, continues the tradition established in the second book. Reichert presents us with another violent, action-packed thriller with a seriously unlikely plot.

In the second book, Susan Calvin, second-year psychiatry resident at a Manhattan teaching hospital, suddenly found herself caught between two equally murderous groups: an anti-robot movement called the Society for Humanity, and a hit squad from a military intelligence agency code-named Cadmium. Both groups believed, for no good reason, that Calvin knew a cheat code that would switch off the Three Laws, allowing positronic robots to be turned into unstoppable killing machines. The Society wanted to kill Calvin to keep the cheat code secret, and Cadmium wanted to kidnap Calvin and torture the cheat code out of her so they could weaponize their own positronic robots. The novel ended with a New York cop named Jake Carson thwarting both groups and saving Calvin's life.

As the third novel opens, Cadmium has come up with a new plan to gain the cheat code from Calvin, a plan that is both murderous and needlessly convoluted. Step one of the plan is to murder a brilliant medical researcher that Calvin has worked with, and make it look like the Society was responsible. In order to give an apparent motive for the Society to commit the murder, Cadmium made it look like the Society made it look like the murder was committed by Nate, an android from US Robots who works at the hospital. Unfortunately for Cadmium, the police are too obtuse to notice the clues they planted that point to the Society as the real culprits. Instead, the police arrest Nate for the murder, then arrest Nate's creator, Dr. Lawrence Robertson, the president of US Robots.

Step two of Cadmium's plan is to stage an attack on Calvin while she's walking through Central Park, and have one of their agents save her from the supposed attackers. Calvin believes that the attackers are working for the Society, and that her savior is a recently-discharged Marine named Pal Buffoni. Buffoni is a handsome devil, and it isn't long before he is able to seduce Calvin, winning both her trust and her love. The staged attack occurs shortly after Calvin has stolen Nate from the police, and Buffoni helps Calvin hide Nate in her apartment. Carson, the cop who saved Calvin a year earlier, then shows up at her door looking for Nate, since he has just been assigned to recover the android. Calvin and Buffoni disguise Nate and send Carson on his way.

Step three of Cadmium's plan is to stage another attack on Calvin, this time making sure to kill her closest friend. Buffoni then pressures her to try to figure out what the cheat code is, even though she has assured him that there is no cheat code. Carson reappears, and is able to surreptitiously inform Calvin that Cadmium has been behind all the attacks. Calvin pretends to work out the cheat code while luring Buffoni into a trap, and Carson is again able to save her.

Logically, there was no reason for Cadmium to commit the first murder and try to frame the Society for it. The first staged attack on Calvin in Central Park accomplished everything they wanted to accomplish: convince her that her life was threatened, and make her reliant on Buffoni for her protection. For that matter, there was no logical reason for the second staged attack. Calvin was already in love with Buffoni, and ready to follow his lead. The murder and the second attack occur because Reichert needs them, not because Cadmium needs them. The murder leads Calvin to quit her job at the hospital and go to work for US Robots, which is where Reichert needs her to be at the end of the novel to set up the stories in Asimov's original I, Robot. The second attack allows Carson to figure out that Cadmium is behind everything, so he can save Calvin again.

To sum up: Reichert's prequel trilogy made a very promising start, then suddenly veered into poorly-plotted mayhem. Was it her plan all along to make the prequels such a jarring departure from Asimov's original, or did she run out of inspiration after the first book and settle for writing a couple of violent thrillers? The whole cheat code MacGuffin derailed the trilogy to no purpose, since the hypothetical existence of a cheat code is never mentioned in any chronologically subsequent story.

I suppose if you squint hard enough, the prequels sort of look like the Elijah Baley novels (except much more violent and poorly plotted), so maybe that was what Reichert was aiming at. If so, I can't help wishing that she had tried to imitate the cerebral tone of Asimov's robot novels (and of the original I, Robot collection, for that matter), and not just the murder-takes-place-and-protagonist-solves-it plot structure.
Posted by Johnny Pez at 9/18/2016 09:49:00 PM 6 comments: