This is the latest installment in the Drowned Baby Timeline, an alternate history where Adolf Hitler drowned at birth and where World War II never took place. In the absence of our timeline's Manhattan Project, nuclear weapons have been developed independently in Italy, France, Great Britain, and the Polish Commonwealth. To avoid a European nuclear arms race, the four nations join together in September 1946 to create the Atomic Control Commission, tasked with maintaining a global monopoly on nuclear weapons . . .

"Oh Lord, not again," said Prime Minister Anthony Eden, and it was not so much blasphemy as a heartfelt prayer.

"I fear so," said Dr. Edward Teller. He was holding a classified ACC report in his hand, just like the one he had shown Eden sixteen months before. "We have clear evidence that the Soviet Union set off an atomic explosion one week ago. Radiation levels around the world have risen to levels comparable to the detonation of a fifty-kiloton device. Radioactive decay products have been detected that are consistent with those produced by the fission of plutonium-239. Data from various seismology stations show that an explosion of that magnitude took place on the tenth of this month near the Siberian city of Nizhnevartovsk. There can be no question about it. The Soviets now have atomic weapons."

"Erm, exactly where is this Nizhnewhatsis place?"

Teller opened the report to one of the appendices, showing an outline map of the USSR. The city was marked by a star with an arrow pointing to it. 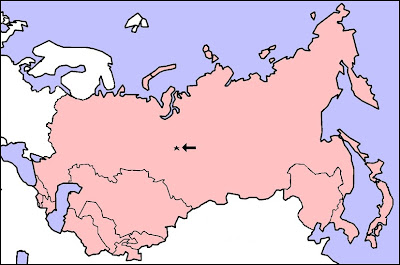 "Good Lord," said Eden, "that's the middle of nowhere. I don't think we have anything that can fly that far."

"You are correct, Mr. Prime Minister," said Teller mournfully. "Nizhnevartovsk is beyond the reach of any aircraft currently in our possession."

"So what are we going to do? Do you have any recommendations?"

"There are of course the standard guidelines laid down in the Geneva Accord," said Teller. "When a nation demonstrates the ability to make controlled use of atomic energy, it is to be offered membership in the Atomic Control Commission, and qualified Commission members are to assume control of any and all facilities for the production and use of atomic materials."

"That didn't work very well with the Americans," Eden pointed out.

Teller gave a distinct harumph. Eden knew that Dr. Teller was dissatisfied with the resolution of the Los Alamos crisis. By joining the Warsaw Pact, the United States had become a de facto member of the ACC, even though it maintained de jure independence of that body, as well as the League of Nations. It was, Eden knew, just a stopgap measure until American antipathy towards the League and the Commission had abated enough to allow them to formally join both
organizations.

In all fairness, it had to be said that the Americans had shown a surprising amount of enthusiasm for their new alliance. The Americans and the Poles had taken to each other like long-lost siblings. Donov's and Burger Tsar restaurant franchises were spreading across America, along with Polish-style volkshäuser communities and Porschewagen automobiles. The Poles for their part seemed fascinated by American cinema and television, and Polish men from all walks of life were growing American-style goatees. The two countries' recorded music industries had practically fused together, and popular songs seemed to come and go simultaneously in America and Poland.

"I fear that the American solution to the Los Alamos crisis is one that the Soviets will be unable to adopt," said Teller.

"No chance of Russia joining the Warsaw Pact anytime soon," Eden agreed. "So if they don't sign on to the Geneva Accord, just what are we going to do?"

"I'm not sure I like the sound of that," said Eden. "It sounds to me as though you're proposing that we attack the Russians."

"Mr. Prime Minister," said Teller, "it may ultimately come to that."

Eden was shaking his head. He still woke up with nightmares of what might have happened if the Los Alamos crisis had turned out wrong. The world had been lucky once; Eden didn't think they would be lucky twice. With a resolution he wished he had shown sixteen months earlier, he said, "No, Dr. Teller, that is simply unacceptable. The costs of a war with Soviet Russia would be astronomical. There must be a better way. After all, we found a way with the Americans."

"Sir, the Americans were willing -- barely -- to accept the substance of Commission control in return for the appearance of national autonomy. I do not believe that the Soviets would behave in a similarly rational manner."

"Mr. Prime Minister, there may be no such alternative."