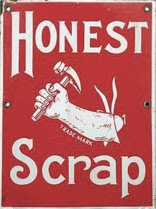 As a recipient of the Honest Scrap Award, I am now obligated to A) reveal ten little-known facts (or fact-like substances) about myself, and B) spread this horrible virus honorable award to seven other bloggers. It's a heavy burden, but I will bear it with the humility and dignity that has come to be my hallmark in the blogosphere.

1. I can roll my tongue.
2. I avoided reading the Harry Potter books until the last one came out, then I read all seven over the course of a very intense ten-day period.
3. I started wearing glasses at age 15.
4. Much as I like David Tennant, Tom Baker is still my favorite Doctor.
5. I can juggle three balls at once, but not four.
6. Whenever I buy (or am given) a new necktie, I have to re-learn how to tie a Windsor knot.
7. I have no middle name.
8. I haven't flown in a plane since 1998.
9. I can't dance like Fred Astaire, but I can dance like Elaine Benes.
10. I have never held a job that utilized anything I learned in college.

1. So can I.
2. Very sensible. I had lost the will to care by the end. There's a reason for trilogies you know.
3. So did I. My son is doomed. We're all glasses wearers in our families.
4. I met Tom Baker once. He came to my home town on a greet he public tour. I had a poster of K9 on my wall with Tom Baker's signiature on it for the longest time. I wonder were it went.
5. I can't juggle.
6. I canm tie ties, but only on other people.
7. I have got a middle name.
8. I have flown in a plabe since 1998.
9. I don't know who Elaine Benes is but I'm guessing I don't want to dance like her.
10. The most transferable skills, and the ones I have used in evey jon I've had, were those I learned whilst waitressing.

Interesting you chased down the meme. I even vaugly recognise some of the names on that list. It seems to have originated in the British mommy blogging community or at least cut a swath through there. I wonder why OMG Pregnant deleted her blog.

*wanders off in search o gossip*