I, Robot: To Protect by Mickey Zucker Reichert 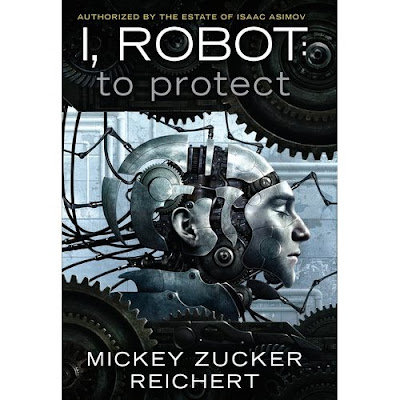 November 2011 saw the publication of I, Robot: To Protect by Mickey Zucker Reichert, the first addition to Isaac Asimov's positronic robot series since the publication of Alexander C. Irvine's Have Robot, Will Travel in 2004, and also the first novel in a projected trilogy. When the books were first announced in 2009, they were described as a prequel trilogy to Asimov's original story collection, I, Robot, centered on the early life of Dr. Susan Calvin, the collection's central character.

Having just finished I, Robot: To Protect, I think it would be more accurate to describe this as a reboot rather than a prequel. In the introduction to I, Robot, Asimov gave some of the details of Susan Calvin's curriculum vitae: born in 1982, received a bachelor's degree from Columbia in 2003 and began graduate work in cybernetics, received a Ph.D. in 2008 and joined United States Robots as a robopsychologist. In other words, Calvin was a roboticist who became interested in robotic psychology.

As I've noted elsewhere, Reichert also pushes Calvin's date of birth forward from 1982 to 2009. She pretty much had to do this, because if she had stuck to Asimov's original timeline, she would have wound up writing an alternate history novel set in an alternate 2008, rather than a science fiction novel set in the future.

Despite the updating of the story milieu and the change in Calvin's profession, Reichert maintains thematic continuity with Asimov's original positronic robot stories by focusing on the Three Laws of Robotics. The Three Laws were arguably Asimov's major contribution to science fiction. (He once predicted that after everything else he did was forgotten, the Three Laws would still be remembered.) By giving his robots a built-in moral sense, Asimov helped to illustrate the sources of human morality, because once you conceive of a being with an innate set of moral standards, it highlights the way that humans acquire (and, sadly, fail to acquire) their own moral standards.

Reichert is a veteran fantasy writer who has been publishing professionally for over twenty years, so she knows how to write readable prose, and proves it here. More than that, though, along with the story's plot involving doctors, mental patients, and terrorists, Reichert looks at how people react when they find themselves sharing their world with innately moral beings: beings who can think and feel as well as humans do, but who are primarily forbidden to injure humans or allow humans to be injured; who are secondarily required to obey humans; and who are only tertiarily required to protect themselves.