The Invisible Man VI: The Furniture That Went Mad 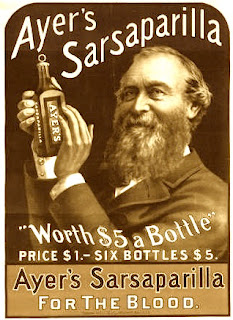 As we pick up the story of The Invisible Man in chapter VI, "The Furniture That Went Mad", it's still the morning of Whit Monday, following the bizarre burglary of the vicarage. The Halls are up with the sun, seeing to the brewing of the Coach and Horses' beer supply in the inn's cellar. Mrs. Hall realizes that she forgot her supply of sarsaparilla, and she sends her husband upstairs to fetch it. On his way to get the bottle, Mr. Hall notices that the inn's front door has been unbolted, and that the stranger's door is ajar. He enters, and finds the room unoccupied, as he had expected. He is surprised to find that all of the stranger's clothing is scattered around the room.

Mr. Hall, (whose first name, we learn, is George), runs down to the cellar to get his wife (whose name, we also learn, is Janny). As they return up the cellar stairs, they hear the faint sound of the front door opening and closing. On the hall stairs, each hears a sneeze, but each assumes it was the other. The enter the stranger's bedroom, and note that the bed is cold, and hence hasn't been slept in for at least an hour.

As the two stare around at the room, the blanket suddenly rises up from the bed and leaps over the foot, exactly as if an invisible hand had picked it up and thrown it. The stranger's hat then levitates off the bedpost and flies at Janny Hall. This is followed by the chair rising off the floor and attacking her, driving her from the room. The door to the stranger's room slams shut and locks.

Janny Hall immediately draws the obvious conclusion: the stranger has used magic to bewitch the room's furniture. The Halls are joined by Millie the Maid, and the three retreat downstairs, and help to revive Janny's frazzled nerves by, as Wells puts it, "applying the restoratives customary in such cases."

The Halls send Millie across the street to Mr. Sandy Wadgers, the village blacksmith, to consult with him on how to deal with ensorceled furniture. Mr. Wadgers agrees that they are dealing with witchcraft, and recommends the use of an iron horseshoe. The four are joined by Huxter the tobacconist and his apprentice, and the six continue discussing the matter until the door to the stranger's bedroom opens, and he emerges, clad as usual in goggles and bandages. The stranger stops to address the assembled villagers. "Look there!" he commands with a pointed finger. They all look and see the bottle of sarsaparilla standing neglected by the cellar door. The stranger then enters the parlour and slams the door in their faces.

Mr. Wadgers recommends that Mr. Hall confront the stranger and demand an explanation. When Mr. Hall does so (after some time spent working up his nerve), the stranger barks, "Go to the devil! And shut that door after you!"
Posted by Johnny Pez at 1/28/2016 09:26:00 AM