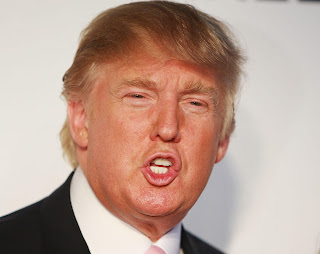 Aficionados of quantum mechanics will be familiar with the paradox of Schrödinger's cat, which was posed by the Austrian physicist Erwin Schrödinger in 1935. Since one version of quantum mechanics holds that different outcomes of a quantum event exist simultaneously until the event is observed from outside, Schrödinger pointed out that a cat in a box whose life depended on such a quantum event would be simultaneously alive and dead, until somebody opened up the box and looked inside.

Now consider Donald J. Trump, short-fingered vulgarian and Republican presidential candidate. Trump has been leading polls among Republican voters for the last six months, has won the last three Republican primary contests, and currently has 82 pledged delegates to his name, more than all the other Republican candidates combined. As Trump's chances of winning the Republican primary increase, two possible futures are coming into existence, depending on whether or not he wins the general election in November.

In the Trump-wins outcome, he is remaking the GOP into a right-wing populist party along the lines of Marine Le Pen's National Front and Geert Wilders' Party for Freedom. In this outcome, Trump is a transformative figure, the Franklin Roosevelt of the Right, harnessing the widespread xenophobia of the American electorate to creat a national-populist majority, and altering the contours of the American political system.

In the Trump-loses outcome, he is destroying the GOP by pandering to an extremist xenophobic minority. In this outcome, Trump's extremism leaves downticket Republicans with the equally unattractive choices of either embracing his radical xenophobia, or trying to distance themselves from it, either of which would alienate an important Republican voting bloc and risk handing hundreds of Federal, state, and local elections to the Democrats.

Eight months out from the general election, it's impossible to know which outcome to expect when Trump faces off against Democratic nominee Hillary Clinton. Will Trump end up steamrolling Clinton as he has all of his Republican opponents, or will his tactic of out-crazying his opponents fail against a candidate who doesn't have to be crazy to win votes? One can make a case for both outcomes, and we won't know for certain until November 8 rolls around and the nation actually votes.

In the meantime, Trump the Transformer and Trump the Destroyer co-exist in the person of the blustering candidate. Only time will tell which one we're currently watching.
Posted by Johnny Pez at 2/27/2016 10:33:00 AM

You know that you are living in bizarre times when you hope that a particular candidate is lying to his base, because if he's really telling them how he plans to 'govern'... well, that's a terrifying thing to contemplate.