Scorpions in a Bottle: The Settlement of Jefferson 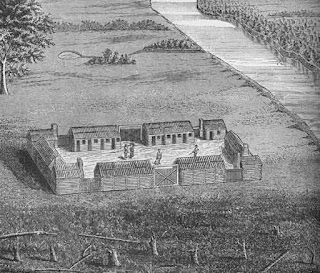 Work on Scorpions in a Bottle continues, in spite of delays occasioned by another bout of vertigo. Today's section carries on the story of the State of Jefferson from the Wilderness Walk. I had to do some actual research for this bit on conditions in Spanish Texas in the 1780s. Fortunately, now that I live in a college town, I have access to the stacks at Penn State's Pattee Library.


The land the American exiles had chosen as their new home, although sparsely populated, was not an ungoverned wilderness. In the century before the Rebellion, Spanish authorities in Mexico City had become concerned about encroachment from French Louisiana, and had made various attempts to establish missions among the local Indians of Tejas. For the most part, these missionary efforts were unsuccessful. When the French ceded Louisiana to Spain in 1762, the need to maintain a settled presence in Tejas had receded, and most of the Spanish settlers had been concentrated around the new provincial capital of San Antonio, though there were also important settlements at Espíritu Santo de Zúñiga and Nacogdoches. The arrival of some 2,000 American exiles in 1782 effectively doubled the settled population of Tejas.

Given the traditional Spanish hostility to Protestantism, Governor Cabello’s willingness to allow the exiles to settle in his province may seem puzzling. However, it must be remembered that a majority of the arrivals were either French Catholics or high church Anglicans from Virginia and the Carolinas. Hamilton records that Father de Gray requested a dispensation from Cabello for the Americans, emphasizing the cruel treatment they had endured at the hands of the British. It is likely that Cabello was swayed by the palpable hatred most of the exiles exhibited towards the British; he was clearly hoping they would serve as a barrier to British expansion into Mexico (as indeed they ultimately did). [1]

Greene and the settlement’s other leaders made a concerted effort to earn Cabello’s trust. A number of the American settlers converted to Catholicism, most notably James Monroe. Greene sent a letter on Cabello’s behalf to Charles Carroll in Maryland, informing him that Catholic colonists would be welcomed in the new settlement, where they would enjoy complete religious liberty and Cabello’s personal protection. The result was a steady stream of new Catholic settlers from the Thirteen Colonies, as well as from Quebec and Nova Scotia.

The arrival of the American exiles proved opportune in one respect. For some time, the Spanish authorities in Tejas had been growing concerned about the depredations committed by the nomadic Apaches, which had been ongoing for decades. Brigadier Teodoro de Croix, the Commandant General of New Spain’s frontier provinces, had determined that war against the Apaches would be necessary. The arrival of the American exiles, many of them veterans of the North American Rebellion, provided Croix with just the force he was looking for. For his part, Greene saw Croix’s proposed war as an opportunity to prove the value of the new settlers to the Spanish administration. In the spring of 1784, Hamilton led a force of 300 American settlers to serve as auxiliaries in Croix’s Apache War. The war was a success; those Apaches who survived were conquered by the Comanche. [2]

The new settlement, which soon gained the name Jefferson, proved attractive to other Americans. As might be expected, many were former rebels who had been reluctant to take part in the initial hazardous overland trek, but were eager to leave British rule and live among friends where their republican sympathies were welcomed. More surprisingly, some were Loyalists who were unhappy with the final settlement that had been worked out between the British government and the reconciliationists, and who refused to live under the resulting Britannic Design. The settlement also attracted European idealists of various stripes, most notably Albert Gallatin of Geneva. By far, though, the most numerous emigrants were neither rebel nor Loyalist, but were simply land-hungry North American settlers, often younger sons of Southern plantation owners. The latter tended to appear at Henrytown with their own Negro slaves, intent on establishing their own slave plantations in the new settlement.

The appearance of the new Southern slaveowners reignited the issue of slavery in the new settlement. Most of the slaves who had been brought on the original Wilderness Walk had either escaped during and after the journey, or been freed by their masters after the establishment of Jefferson. Hamilton and James Madison spoke out in favor of abolishing slavery altogether. Many Jeffersonians, though, regarded Negroes as inherently inferior and incapable of participating in the new society being established along the Trinity River. They favored maintaining the institution of slavery. As more settlers arrived from the Southern Confederation, this attitude became the majority sentiment in Jefferson. [3]

News of the American settlement in Tejas soon found its way to King Charles III in Spain. Initially, Charles approved of the new settlement, particularly after accounts of the Apache War reached him. However, he became disturbed by the settlement’s quick growth. By 1786, the American population of Tejas had surpassed 10,000, far outnumbering the province’s Spanish population. With the threat posed by the Apaches gone, the settlement was also growing beyond its original grant in the Trinity valley, spreading west to the Brazos and Colorado Rivers, and approaching San Antonio itself. The king issued a proclamation forbidding further entry into Tejas by North Americans. [4]

By the time the new proclamation reached Tejas, Cabello had departed to take up his new appointment as Viceroy of Peru. His successor was Rafael Martinez Pacheco, an overbearing man with a long, troubled history in Tejas. Matters might have reached the breaking point then had not Greene taken advantage of the new governor’s cupidity. A series of bribes persuaded Martinez Pacheco to look the other way while shiploads of new settlers continued to arrive from Charleston and Norfolk. [5] By the time Governor Martinez Pacheco was relieved of his post in 1790, the Jefferson settlement had grown to 20,000 inhabitants (including 4,000 Negro slaves). By then, royal scrutiny of the new settlement had ended. Charles III died in December 1788, and was succeeded by his less-capable son, Charles IV. Charles preferred to leave the administration of the government to a succession of first ministers. Martinez Pacheco’s successor, Lt. Col. Manuel Muñoz, was an elderly man in poor health who was unable to govern Tejas effectively. Between them, King Charles and Govenor Muñoz allowed the Jeffersonians operate with total autonomy. The Jeffersonians took advantage of this benign neglect to craft a new instrument of government for themselves.
--
1. Nicholas Oldro. Cabello y Robles and the Jeffersonians (Jefferson City, 2010).