Scorpions in a Bottle: The Lafayette Convention 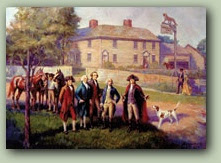 The latest section of Scorpions in a Bottle continues the story of the founding of the state of Jefferson, carrying on from the Settlement of Jefferson. We now look at the circumstances surrounding the Lafayette Convention, in which the settlers draft a written constitution for their new not-quite-state. This section completes chapter 4 of Scorpions, "The Wilderness Walk".

Next up: the Britannic Design!

As subjects of the King of Spain, the Jeffersonians were in theory under the command of the royally-appointed governor of Tejas, and subject to Spanish law and administration. In practice, Cabello did not insist on strict adherence to Spanish law. Initially, the American exiles were so worn from their arduous two-year journey that Cabello was content to allow them to settle in place and recover from their ordeal. After the Apache War, the Jeffersonian militia was sufficiently large and experienced that Cabello preferred to avoid risking an open break with the new settlers. Martinez Pacheco quietly accepted his bribes and did not disturb the Jeffersonians, while Muñoz was content to allow the status quo to continue. [1]

Greene’s death in February 1790 brought about a crisis among the Jeffersonians. Since the departure of the original group from ten years before, Greene had been the undisputed leader of the exiles. His death created a power vacuum that various factions within the settlement competed to fill. The most important division among the Jeffersonians was between those settlers who had come from New England and those who had come from and the . The New Englanders tended to be more radical, more committed to the ideals of the Rebellion, more overtly anti-British, and more abolitionist. The Southerners, by contrast, were more moderate, more pragmatic, less anti-British, and more pro-slavery. The Southerners also made up an absolute majority of the Jeffersonians, while the rest of the settlement was divided among New England, Francophone, and Hispanophone minorities who had little in common with one another. [3]

James Madison, although a Virginian by birth, had been a protégé of ’s during the Rebellion, and he remained strongly committed to his late mentor’s ideals. In the growing disputes among the Jeffersonians, he found himself siding with Hamilton and the faction. In his pamphlet “The Tyranny of the Majority”, he warned his fellow Southerners that they risked tearing the fledgling settlement apart if they used their numbers to force their own policies on the other settlers. What was needed, Madison argued, was a written constitution to serve as a blueprint for a government, which would make explicit which powers it exercised, and just as important, which powers it was denied. [4]

Hamilton and Madison agreed that the Jefferson Council, being essentially an ad hoc body assembled haphazardly by the original settlers in the year after their arrival, lacked a mandate for the drafting of a frame of government. Instead, the two men and their allies promoted the idea of a convention called for the specific purpose of drafting a new constitution for the settlement. The selection of Lafayette for the site of the convention, rather than Jefferson City, was intended to emphasize the idea that the new constitution would represent the interests of all the free inhabitants of Jefferson, Catholic as well as Protestant, Francophone and Hispanophone as well as Anglophone.

The convention was called to order on Wednesday, June 19, 1793, and Madison was chosen by the delegates to preside over the meeting. The delegates to the Lafayette Convention were strongly influenced by the late John Adams, who had published a treatise called Thoughts on Government shortly before the drafting of the Declaration of Independence. Adams had advocated for separate executive, legislative, and judicial branches, and for a bicameral legislature in which a popularly elected lower house would choose the members of an upper house.

Over the course of the next two months, the Lafayette Convention, guided by Madison and Hamilton, created a government for the Jefferson settlement based on Adams’ prescriptions. The various towns and settlements of Jefferson were divided into 42 electoral districts, each with roughly one thousand free inhabitants, which would send one representative to the lower house of the legislature, the Chamber of Representatives, for a term of two years. The Chamber in turn would choose a fifteen-member upper house, the Senate, whose members would serve for five years. All legislation would originate in the Chamber, and would then either be confirmed or vetoed by the Senate.

The most contentious issue facing the Lafayette Convention was the nature of the executive branch. Should the executive be a single man or three men? Should it be chosen by popular vote or by the legislature? Given the factionalized state of the settlement, it was agreed that choosing a single executive would exacerbate tensions, and therefore a three-man executive would be preferable. Madison favored an executive chosen by the legislature, and he was able to sway the convention to his side. The executives, known as governors, would be chosen by the Senate from among the members of the legislative branch, and would serve for a term of five years. A proposal to limit the governors to a set number of terms, either one or two, was opposed by Madison, and again he was able to persuade the convention to vote his way. [5]

The judicial branch would consist of a seven-member High Court, who would serve for life, and who were nominated by the governors and confirmed by a two-thirds vote of the Senate.

If the machinery of government established at Lafayette seems unnecessarily elaborate for a settlement with only 42,000 free inhabitants, it must be remembered that Jefferson was growing at an extraordinary pace, due to both immigration and natural increase. The delegates to the convention were well aware of the fact that they were creating a government not only for the present, but for an indefinite future that might well see Jefferson expand across North America and become a nation of millions. With that in mind, the delegates at Lafayette added a provision to the constitution allowing for the expansion of the Chamber of Representatives to reflect the results of a decennial census of the settlement. [6]

The delegates dealt with the issue of slavery by not dealing with it at all. The institution was not mentioned at all in the Lafayette Constitution. As it happened, both supporters and opponents of slavery could point to sections of the constitution that they interpreted as giving them the power to either protect or limit the institution should the issue arise in the future. [7]

All of the townships in the Jeffersonian settlement restricted the franchise to male property owners, and this was reflected in the constitution, which established a £5 property requirement for voting in elections to the Chamber of Representatives. Although some modern historians see this as evidence that the Lafayette Constitution was fundamentally undemocratic, it should be remembered that land in Jefferson was so cheap that a household could acquire £5 worth of property within three years of being established. It has been estimated that out of 8,000 free adult males residing in Jefferson in 1793, about 7,500 met the £5 franchise threshold, which made Jefferson the most democratic society in the world at the time. [8]

The delegates to the Lafayette Convention ratified the final draft of the constitution on August 23. A referendum among enfranchised Jeffersonians took place on Tuesday, October 15, with nearly 80% voting their approval. Elections for the Chamber of Representatives were held on Wednesday, December 4, and the winning candidates assembled in Jefferson City on Sunday, January 19, 1794.

The newly-elected Chamber did not include either Madison or Hamilton, both of whom expected to be chosen for the Senate. Their expectations were realized when the Chamber cast its ballots for the Senate, with each Representative offering fifteen names. Although neither man received the votes of all 42 Representatives, Madison finished first with 39 votes, and Hamilton second with 33. When Madison and Hamilton met with their 13 Senate colleagues on January 25, all agreed that they two of them would serve as governors, along with Representative Samuel Johnston of North Carolina, who had been a leading figure in the colony during the Rebellion.

The formation of the new government would soon be tested by the coming of war between Spain and Great Britain. As a consequence of that war, the Jefferson settlement would find itself suddenly thrust upon the world stage.


5. Celia Fernandez. Decision at Lafayette: The Making of the Jefferson Constitution (Jefferson City, 2009).

If you want your ex-girlfriend or ex-boyfriend to come crawling back to you on their knees (no matter why you broke up) you gotta watch this video
right away...

(VIDEO) Have your ex CRAWLING back to you...?