Embracing "Thia of the Drylands" 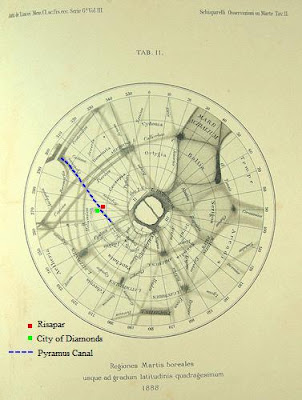 During the Gernsback Era of science fiction, there were only two worlds (well, really one and a half worlds) whose surface features could be shown on a map: Mars, and the near side of the moon. Stanley G. Weinbaum might write about mountains on Io and valleys on Europa, but they were sheer invention on his part -- until the advent of robot space probes in the 1960s and 1970s, Io and Europa remained nothing more than points of light seen through optical telescopes.

Mars was different. Giovanni Schiaparelli and later astronomers -- well, some later astronomers -- had seen surface features and given them names and published Martian maps showing them. You could pick up one of Schiaparelli’s maps and follow the adventures of Dick Jarvis in Weinbaum’s “A Martian Odyssey”, or of Martin Gibson in Arthur C. Clarke’s The Sands of Mars. The dry sea-bottom of Syrtis Major featured in such tales as Poul Anderson’s “Duel on Syrtis” and H. Beam Piper’s “Omnilingual”, and the canals mapped by Schiaparelli and Percival Lowell could be found in almost any story written before 1965.

So it is with “Thia of the Drylands”. Vincent sets his fictional Martian city of Risapar on the banks of the Canal Pyramus, one of the canals mapped by Schiaparelli in the late 19th century (see map). On the far side of the Canal Pyramus, east of Risapar, lies the City of Diamonds and the Martian terminus of Carl Vetter’s space tube.

In addition to being science fiction, “Thia of the Drylands” is also a suspense story. The essence of the suspense story is that there’s something going on that the point-of-view character doesn’t know about. This will be resolved in one of two ways: if the POV character is clever, he’ll work out the mystery by himself; if the POV character is not clever, someone else will wind up explaining the mystery to him. Cliff Barron is not a clever man, and he has to be told what’s going on, first by Thia, and then by Sykes.

The date when the story takes place can be determined with some accuracy thanks to the information Vincent includes. Cliff Barron has been employed by Interplanetary Lines for ten years. He had just joined in 1997 when he visited a huge power plant, which places the story in 2007. Furthermore, Barron is informed by Carl Vetter that Earth and Mars are currently fifty-five million miles apart, and this was actually the distance between the two worlds during the opposition of December 2007, something Vincent would have been well aware of.

The background against which the story takes place is one that Vincent would continue to use whenever he set a story on Mars. The Canal Cities Union would be mentioned again in the later story “The Barrier”, along with the tense diplomatic situation between Earth and Mars. In the still-later story “Neutral Vessel”, set several generations after the initial contact between Earth and Mars, Mars has actually gone to war with Venus, while Earth remains neutral. As is usually the case with Vincent’s interplanetary stories, the various worlds of the solar system are all inhabited by human beings similar enough to Earth humans to form romantic attachments and even intermarry.

The Martian city of Risapar will be a surprise to readers who are used to Leigh Brackett's decadent and decayed Low Canal towns. Risapar shows that Martian civilization is still at the height of its powers: a public transportation system of ronsal hovercars bustling along on a network of nickle-cobalt roadways, soaring buildings, and a busy populace. Of course, given that the Canal Cities Union is an independent state strong enough to threaten war with the League of Terra, and given that the Martian surgeon Lintarg runs the most advanced clinic in the solar system, Martian civilization would have to be on a par with Earth's.

Vincent’s skill at characterization continues to grow. In Cliff Barron, he draws a convincing portrait of a bitter, alienated young man suffering emotionally (as well as physically) from a recent crippling illness. Barron is emotionally unstable and easily manipulated, and his speech is frequently disjointed. Even after he is restored to health, his emotions continue to escape his control. Perhaps he will regain his equilibrium during the trip to Callisto. For Thia’s sake, let’s hope so.

Speaking of Thia, she too is emotionally unstable, understandably given the shocks she has suffered, and continues to suffer in the course of the story. Cliff Barron's arrival presents the Diamond Citizens with a dilemma: he could reveal their whereabouts to the Martian authorities if they let him go. Given the stakes facing the outlawed drylanders, Durvil’s plan makes the most sense: keep Cliff Barron captive until the Diamond Citizens have made their escape to Earth. Instead, Thia helps Barron to escape, running the risk that he will be captured by the authorities in Risapar and reveal their location.

As for Carl Vetter, he's a straightforward villain of the corrupt corporate executive variety. He steals the plans for the space gun from one of Leonard Sykes' friends, and builds it in a secret base in Arizona. When the Diamond Citizens contact him and ask for his aid in escaping to Earth, Vetter could just turn them over to the Canal Cities Union and collect the reward. Instead, he concocts a scheme to make some quick money by agreeing to smuggle the Diamond Citizens to Earth, killing them as they board his space car, and then turning them over to the Canal Cities Union. And since he's too cheap to just hire someone to test the space gun, he manipulates Barron into volunteering, falsely promising to pay him fifty thousand zaks and get him an appointment with Lintarg of Risapar.

Nobody in the story suggests that Vetter deliberately infected Barron with the Martian disease in the first place just to help recruit him, but it seems like a logical inference. Vetter, after all, was on the J-18 when Barron contracted the disease. And it was the Martians who approached Earth's Secret Service to suggest that Vetter was planning to recruit Barron, which indicates that they knew or suspected that Vetter had infected him.

On the other hand, Barron would have had no need to take part in the trial run of the space gun if Sykes had agreed up front to send him to Mars for treatment, and Vetter couldn't know ahead of time that he would do so, which suggests that Barron's infection was natural, and that Vetter simply picked him up on the rebound. Or, it may have been the agents of the Martian Union who infected Barron, as part of their plan to use him as bait. After all, it was apparently their idea to have Sykes turn down Barron's request, giving Vetter his chance to recruit Barron.

In any event, the Martian authorities needn't have worried about Vetter's association with the Diamond Citizens. Together with Maranu, Vetter carried out his nasty plan to murder the drylanders (including, presumably, Durvil). Had he not died when the space car was launched on its last trip, Vetter presumably would have shipped the dead drylanders back to Mars and claimed the reward for them.

At the end of the story, Barron is a wanted man on Earth, presumably because the Canal Cities Union wants him arrested for associating with the Diamond Citizens, and the Terran government is required by treaty to extradite him. He and Thia agree to exile on Callisto, which has recently been visited by explorers and presumably has a native human civilization. Barron and Thia can explore Callisto (and perhaps the other Jovian moons) while presumably Sykes returns to Earth and pulls some strings to get the charges against them dropped.
Posted by Johnny Pez at 12/24/2009 08:23:00 AM

Gotta read this one, can Thia hold a candle to the "incomparable" Dejah Thoris?

Just had a look at Grognardia. Interesting, but it's been a couple of decades since my gaming days.

And yes, I'd say Thia stacks up against Dejah. She's got a femme fatale vibe, and she's viviparous to boot.

Such a rich, emotional story. Full of color, action, more feeling than any Hollywood blockbuster. Loved it.