"Once in a Blue Moon" by Harl Vincent, part 1 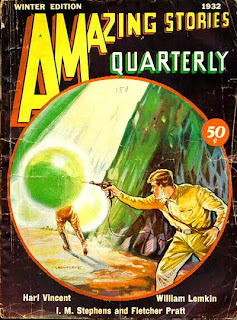 Harl Vincent was the pen name of Harold Vincent Schoepflin (1893 - 1968) a mechanical engineer employed by Westinghouse. When Hugo Gernsback launched the first science fiction magazine in 1926, Vincent began writing and submitting stories, publishing his first one, "The Golden Girl of Munan", in the June 1928 issue of Amazing Stories. Vincent was one of the most prolific of the early magazine science fiction writers, publishing over seventy stories between 1928 and 1942. All of his early stories have entered the public domain, and have begun appearing online in two places: at Project Gutenberg, and on this blog.

Most of Vincent's stories have never appeared anywhere but the science fiction pulp magazines where they were first published. One of the few exceptions is "Once in a Blue Moon", a story which first appeared in the Winter 1932 issue of Amazing Stories Quarterly, and was eventually reprinted in the 2001 anthology Rainbow Fantasia, edited by Forrest J. Ackerman and Anne Hardin.


Once in a Blue Moon
by Harl Vincent

Like the alchemists of ancient days who sought to transmute baser metals into gold and silver, our scientists of the twenty-first century have labored for three decades in the hope of producing lunium in their crucibles. They have analyzed the metal with infinite care and precision and have mixed its constituent elements under every conceivable combination of pressure and temperature. Yet their efforts have met with failure. The natural alloy found on Earth’s moon seems impossible of duplication in their laboratories.

The remarkable properties of the moon metal were brought to light in 2017, after Philip Meta returned from that first rocket trip which was sponsored by the Smithsonian Institute. He brought with him a sample of the strange blue metal and, quite by accident, experimenters discovered that certain high-frequency electrical impulses imparted to it the powerful gravity force which has since been used in lifting and propelling our vessels of air and of space. Then followed the rapid broadening of man’s knowledge and attainments that came with the contacts he was enabled to establish with other inhabited planets.

There is no need that the men of science produce synthetic lunium; the mining of the natural substance has now become a well-organized industry, and vast quantities of the material are daily removed from the so-called rays of the moon’s surface and transported to Earth, Mars, and Venus in huge freighters of the ether whose construction was made possible by the use of the blue metal.

But the early adventurers and prospectors faced great hardship and untold danger in making the trip from Earth in the crude rocket ships of the day. Many of those who reached the moon did not return to tell of their experiences; many others missed their destination entirely and were lost in the trackless void of outer space.

And we, who so calmly enjoy the benefits brought to mankind by the universal use of the moon metal, are prone to forget the difficulties which beset those early pioneers. There were strange tales that came to our ears, conflicting stories and most of them incredible. In the increasing rush of modern civilization we gave them little heed. And returning voyagers soon ceased speaking of their adventures.

There came the time when the moon presented to us an entirely new face, the satellite having turned completely over on its axis during a single night. It was a nine days’ wonder to the layman, but scientists were glib in explaining the phenomenon by natural causes, although there were many dissenting opinions among them. This, too, was forgotten in a short time, and the world went merrily on. It was far more interesting to speculate on the financial and educational gains to be realized from the contemplated alliances with the peoples of other worlds.

The true story of what happened in the ancient hidden world of Luna has never before been told and is only made public at this time through the finding of the diary written by one of the terrestrial participants who recently died. In its essentials the story has been confirmed by other survivors of the expedition. Whether the diarist was strictly accurate in his account is of little moment; the tale makes good reading, and the fact remains that Luna did, on June 6, 2019, completely reverse her position in the heavens with respect to earth. And, be it known, astronomers are yet disagreeing as to the precise nature of the disturbance which brought about that change. It is the way of scientists.

This, the diary’s story, likely will leave them still at odds.

Moon Rocket IV lay just south of the great crater of Tycho, within less than a half mile of the broad ray of lunium, which extended to the southeast in the direction of the Doerfel Mountains. Her main cargo compartments were nearly filled with huge ingots of the blue metal that was so greatly desired by a world gone suddenly mad over the idea of interplanetary travel. Those who had financed the vessel’s construction were sure to reap handsome profits on this, her second voyage.

Captain Wallace James was at the eye-piece of the telescope in the observation dome at the vessel’s nose. The glass was trained on the great white-mottled green globe that hung now in the lunar sky. Earth! A quarter of a million miles away; infinitely remote it seemed and at the moment so utterly desirable a berth for the Rocket IV. A wave of nostalgia gripped the captain and he vowed under his breath that this was his last voyage outside the atmosphere of Terra.

“Reporting the approach of Rocket VII, sir.” Clark Peters, his optophone operator and auxiliary pilot, broke in on his meditations.

“Close by, Pete?” The captain turned guiltily away from the eye-piece of the refractor, making desperate efforts to compose his features.

“A thousand miles out and coming in fast. Too fast, I’d say.”

Young Peters, wiry, lanky Kansan, with huge hands and feet, stood their awkwardly with thumbs hooked in his suspenders. Deep concern was in his long, solemn countenance.

“How fast?” The captain drew in a quick breath; this was to be another case of a hopeless rescue attempt, he feared.

Pete, though hardly past thirty, was the veteran of a half dozen South American revolutions and of many times that number of hairbreadth escapes from sudden and horrible death. Easy-going and fearless, he was ordinarily unmoved in the face of danger of any sort. But he was sick of digging mangled, exploded remains of his compatriots from the twisted wreckage of rockets. They all were.

“Well, I don’t know now,” the operator drawled, his tense look relaxing somewhat. “They should be in sight by this time. And maybe it isn’t as bad as I thought.”

Captain James swung the telescope around and searched the heavens in the direction indicated by Peters. “Who’s the master of the vessel?” he mumbled.

“Their optophone man didn’t say. And a funny thing, too, no image came through on the disc. Transmitting operator said his image projector was out of whack -- generator burned out or something.”

“You think they were hiding something?” The captain did not look up from the eye-piece, but his voice was brittle.

Moon Rocket VII had been constructed and launched by a group of shady financiers, he well knew.

“Don’t know as I’d go so far as to say that,” Peters replied with calm deliberation. “But –“

“Here she comes!” the captain exclaimed excitedly. “Rocket-tubes flaming, but hardly slowing her down. Plug in the opto, Pete.”

Whatever the doubt regarding the Rocket VII, she was a ship in distress and their duty was clear.

The optophone purred gently as Pete closed the switch, then emitted the hollow, empty sound of an open ether wave. “Ahoy, Rocket VII!” he called into the disc. “Rocket IV asking if you are in need of help.”

“What in the devil could you do if we were?” the optophone snarled in return.

“To hell with them!” the captain roared, interrupting. “If that’s the way they feel.” He turned jerkily from the telescope and his face was purple when he glared into the disc of the opto.

No image was there to return his savage stare.

And then they saw the Rocket VII through the thick glass of the observation port. Streaking across the black velvet of the heavens she was, and heading northwest over Tycho, the great lunar crater, in the direction of Theophilius. Her forward rocket tubes were belching yellow flame, yet she hurtled on as if the reaction against the expanding gases was of no avail.

“With your permission, sir, I’d like to follow them,” Pete offered. He switched off the optophone as he spoke, and his grin had crystallized into an ominous thing that had no mirth in it.

Captain James looked out over the earth-lit lunar landscape in the direction the unfriendly vessel had taken. He hated to risk the lives of any of his crew, Pete’s especially. But the strange actions of Rocket VII demanded investigation.

“Very well, Pete,” he agreed finally. “But the miners are all out working the ray. You’ll have to take the kid along -- Downey, I mean. And old Saunders, though I’m afraid he’ll not be much good to you.”

“Okay, sir; they’ll do.” Pete nodded grimly and was gone.