Scorpions in a Bottle - Abolitionism 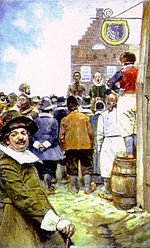 The writing of Scorpions in a Bottle continues. The current section -- the second part of Chapter 6 -- deals with the rise of abolitionism in the Northern Confederation in the 1780s.

In North America, too, it came as a surprise when Lord Cornwallis was passed over for Dickinson to replace Albany, not least by Dickinson himself. Along with the official notification of his appointment, Dickinson received a personal note from Lord North congratulating him on his advancement and soliciting his recommendation for his own replacement as Governor-General of the Northern Confederation. Dickinson responded by suggesting Governor Clinton, thereby further alienating Galloway, who resigned as Governor of Pennsylvania after issuing a public denunciation of Dickinson’s role in the Rebellion. [1]


Galloway was not the only prominent figure to speak up against Dickinson’s selection. Governor-General Connolly made no secret of his outrage that a reliable Loyalist like himself should be passed over in favor of a man who had taken up arms against the Crown. Connolly did everything in his power to undermine Dickinson’s authority, though thanks to Bland his power amounted to little.


Bland, for his part, remained on cordial terms with Dickinson, although he soon fell out with Governor-General Clinton. By 1785, Bland’s views on the Rebellion had changed dramatically, possibly as part of his ongoing struggle with Connolly. Despite having served himself in the Continental Army, Bland had become a committed Loyalist, and he had taken to laying blame for the Rebellion on Northerners, including Clinton himself. Matters came to a head in 1788, when Bland attacked Clinton by name during a meeting of the S.C. Council. “The Rebellion began in the north,” he declared, “and northerners remain rebels at heart. They are the vipers in our bosoms, and we will yet rue the day we allowed them to escape the hangman’s noose and insinuate themselves in our counsels.” [2] When Bland’s remarks reached him, Clinton gave as good as he got, declaring that “our friend from Virginia is a man of great sensitivity. He left the rebel cause only a month after Saratoga. Had the victory not been won by Burgoyne, today he would be toasting the health of General Gates and others of his stripe. But Burgoyne prevailed, so our friend damns the rebels of Boston and conveniently forgets the rebels of Williamsburg.” [3] Hostilities between the two confederations remained high for the remainder of the century, only dying down after the victories of the Trans-Oceanic War.


Bland’s growing intransigence, combined with Connolly’s hostility, meant that subsequent meetings of the Grand Council accomplished little. The border dispute between Quebec and the N.C. continued to hang fire, with residents of the two confederations nearly coming to blows in the District of Maine in 1788. The Grand Council’s only accomplishment of note during this period was a 1785 resolution renaming Pittsborough Burgoyne.


For the most part, Dickinson’s tenure as Viceroy saw conditions in the former rebel colonies return to their ante bellum state. Commerce between the confederations and Britain resumed, as the Southerners increased shipments of tobacco and other cash crops, while the Northerners carried on the old triangular trade between New England, West Africa, and the sugar islands of the Caribbean.


The most notable exception to this return to pre-rebellion conditions was the growing movement in the Northern Confederation for the abolition of Negro slavery. Abolitionism received a boost during the Rebellion after Lord Dunmore issued his Emancipation Proclamation in November 1775, offering freedom to any slave or servant who deserted a master in rebellion against the Crown, and who took up arms against the rebels. Although Dunmore’s initial attempt to form an Ethiopian Regiment of freedmen proved premature, the Proclamation became general British policy after the rebels declared themselves independent. After the British victories at Albany and Philadelphia, thousands of Negro slaves deserted their masters and made their way to Loyalist territory. Altogether, it is estimated that from ten to fifteen percent of the slaves in the rebellious colonies, roughly fifty thousand to seventy-five thousand, were freed under the Dunmore Proclamation between 1775 and 1778. [4] The result was the creation of a sizeable class of free Negroes throughout the Thirteen Colonies. By 1780, free Negroes in the Northern Confederation outnumbered enslaved Negroes by two to one. Pennsylvania became the first province to abolish slavery in 1784, followed by Connecticut and Massachusetts the following year. In 1790, the N.C. Council passed legislation to gradually abolish slavery by freeing children born to slave mothers after that date. [5]


This proved to be another source of friction between North and South in the C.N.A. Although the Dunmore Proclamation also created a class of free Negroes in the Southern Confederation, these always remained a relatively small minority of the Negro population, and were always subject to various restrictions. Southerners frequently accused Northern abolitionists of encouraging runaways and slave uprisings. Southern paranoia regarding abolitionism increased as the influence of Northern abolitionists led to the passage of similar legislation by the Quebec Council in 1796 and the Indiana Council in 1803. [6]
----


1. Michellet. Dickinson and Galloway, pp. 414-15. Galloway’s decision to resign was also doubtless affected by the death of his wife in February 1784. He later remarried, and his descendants through his second wife became one of the most prominent families in the C.N.A.

Been thinking about this.