Scorpions in a Bottle: The First Viceroy 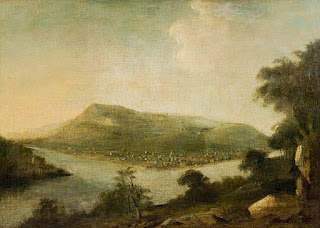 This section of Scorpions in a Bottle concludes chapter 5 on the establishment of the C.N.A.


In the months immediately following Saratoga-Albany, Burgoyne worked diligently to strengthen the fragile lifeline connecting his army to the main British base at New York. He was aided by the Continental Army’s leadership reshuffle, which ensured that he faced no concerted opposition from the Americans. By the time of the armistice in June 1778, Burgoyne’s position in Albany was secure, and he was free to send units to occupy the remaining rebel positions, such as Fort Stanwix, and to move his own headquarters to New York.


The reassignment of Clinton to Norfolk and Howe to Boston left Burgoyne in control of the four Middle Colonies. Unlike his two colleagues, he had no ongoing rebel insurrection to deal with. [1] Burgoyne’s most intractable problem was the Royal Governor of New Jersey, William Franklin, who shared Lord Dunmore’s vindictiveness towards the former rebels. Like Clinton, Burgoyne was eventually forced to use his own authority to replace the obstinate royal governor with a more moderate man to keep him from provoking a renewed uprising.


In addition to administering the most loyalist section of the Thirteen Colonies, Burgoyne also had a talent for gaining popular approval that stood him in good stead. Most notably, Burgoyne, a widower, enjoyed a highly-public romance with Mrs. Abigail Conrad, the widow of a soldier in the Continental Army who had died at Valley Forge. Burgoyne’s marriage to Mrs. Conrad in February 1780 was the social event of the season, and did much to win over former rebels in the Middle Colonies. Burgoyne also wrote and produced two new plays while in New York, both on American themes. The first told the story of the Indian princess Pocahontas, and the second that of Peter Stuyvesant, the tyrannical, peg-legged governor of Dutch New York in the seventeenth century.


In November, word came of Burgoyne’s elevation to the peerage, followed shortly by news of the passage of the Britannic Design, and of Burgoyne’s appointment as Viceroy of the C.N.A. Burgoyne’s satisfaction at his appointment was tempered by the news that he would be expected to move from New York City to the rough frontier town of Pittsborough.


Over the course of the next year, the Thirteen Colonies saw the return of Dickinson, Dorchester, Connolly, and the others from London, and preparations were made for the establishment of the C.N.A. Dickinson took up residence in New York, and Connolly in Norfolk, in anticipation of their appointments as governors-general of the Northern and Southern Confederations. The summer of 1781 saw the Duke of Albany and his family make a triumphant tour across the former battlefields of the Rebellion from New York to Philadelphia. He gave speeches at Princeton, Trenton, Germantown, and Brandywine, in which he praised the valor of those who fought on both sides, and spoke of the colonial rights enshrined in the Design as a victory for the colonial cause.


In the fall, Albany led his family along the long, rugged trail that Braddock had blazed 25 years before to the forks of the Ohio. In Pittsborough, Albany was hosted by Alexander McKee, a prominent Loyalist, while plans were drawn up for a permanent residence called Government House where the Viceroy would reside and oversee periodic meetings of the Grand Council.


In the spring, Albany sailed down the Ohio to Kaskaskia, to meet with Pierre Concordé, a prominent local landowner who would serve as the first Governor-General of Indiana. From there, he took ship down the Mississippi to New Orleans, and from there sailed to Norfolk to meet with Connolly, and with Theodorick Bland, who would remain the Royal Governor of Virginia under the Design. [2] Albany returned to Pittsborough in early June, accompanied by a force of Virginia militia sent by Bland to discourage any attempt by Marion’s raiders to attack the party. He spent the remainder of the month overseeing preparations for the upcoming ceremony of investiture.


At noon on July 2, 1782, Albany was formally sworn in as Viceroy of the Confederation of North America. Lord Cornwallis, who had been appointed Lt. Viceroy, was sworn in at his headquarters in Boston the same day. Similar ceremonies were held for Dickinson in New York, Connolly in Norfolk, Dorchester in Quebec City, Concordé in Kaskaskia, and Francis Legge in York Factory. In the latter two instances, the ceremony also celebrated the renaming of the new confederation capitals to, respectively, Fort Radisson and North City. [3]


The new Viceroy of the C.N.A. divided his time between overseeing the construction of Government House in Pittsborough and traveling to the capitals of the provinces and confederations of the new colonial union. Albany found that the most troublesome of his new duties was mediating between Connolly and Bland.


Connolly was determined to assert the prerogatives of his new office as governor-general, and Bland was equally determined to minimize those prerogatives. Bland was able to prevail by arranging to have himself appointed to represent Virginia in the Southern Confederation Council, and by encouraging his fellow royal governors to do likewise, which they did. Faced with a council made up of his fellow royal appointees, each with his own patrons and supporters in Parliament, Connolly found that he could do little except bluster and complain, which he did copiously.


Dickinson, by contrast, was able to rely on his popularity among his fellow Northerners to ensure smooth relations with the delegates appointed by the N.C.’s provincial governments. In particular, the former rebel general George Clinton owed his own rehabilitation and advancement to the office of Royal Governor of New York to Dickinson’s influence, and he remained a strong supporter of the new governor-general. Dickinson received less support from Galloway in Pennsylvania, who was generally unhappy with the changes that had been made to his Plan of Proposed Union, and was particularly unhappy that Dickinson had been chosen over him to serve as Governor-General of the Northern Confederation. [4]


The Indiana Council was chosen by that conferderation’s landowners, most of whom, like Concordé, were Frenchmen who had settled there before the Seven Years’ War. Indiana’s isolation meant that they had little to do with the eastern confederations, though the arrival of a steady stream of settlers from the British lands foretold that the confederation’s future would bring it closer to the rest of the colonial union. The Quebec Council, likewise, was drawn from French landowners of longstanding. Despite this, Lord Dorchester’s long tenure as governor, going back to the 1760s, ensured that he and the Quebecois were able to work well together. Manitoba remained what it had been before the Design, a fief of the Hudson’s Bay Company inhabited mostly by fur traders. Legge spent most of his time in Quebec City, visiting North City for only a month or so during the capital’s brief summer to attend his own investiture ceremony. [5]


By the late summer of 1783, Albany had succeeded in establishing the Britannic Design as a working system of government for Britain’s North American colonies. The first meeting of the Grand Council was scheduled to take place on September 28, and Albany was deeply involved in preparations for the event when he contracted a cold on September 3. With the upcoming meeting so close, Albany ignored his doctor’s suggestion of bed rest, and continued his work. This worsened his condition, and within a week Albany had come down with pneumonia. The Viceroy was bled several times, in line with the medical practice of the day, which of course served to weaken him further, until he finally succumbed on September 20, 1783. [6]


2. There is a popular legend that Albany met with Nathanael Greene as the latter was preparing to make the final leg of the journey to Jefferson. Unfortunately, the historical record shows that Greene’s party had already departed from Louisiana by the time Albany arrived. Bennet. The First Group, pp. 317-18.


3. Fort Radisson was named after Pierre-Esprit Radisson, a co-founder of the Hudson’s Bay Company. North City was of course named after the Prime Minister.


5. Legge fell ill in the spring of 1783 and died at Quebec City on 15 May. The office of Governor-General of Manitoba remained unfilled for five years until the Jenckinson Ministry appointed Samuel Hearne at the suggestion of the H.B.C. Paul McIlwain. Manitoba: A History (Port Superior, 1995), pp. 27-30.