"The Menace from Andromeda" by Schachner and Zagat, part 6

(part 5) (part 7)
This is the sixth installment of "The Menace from Andromeda", the third published story by Nat Schachner and Arthur Leo Zagat. It originally appeared in the April 1931 issue of Amazing Stories magazine, and has never been republished.

As we join our story, the brilliant young astronomer Donald Standish has discovered that a planet in the Andromeda nebula he named Alcoreth is actually composed of living matter. However, since Alcoreth has disappeared, he is unable to prove it to the scientific community. He decides instead to discuss the matter with his fiancée Mary Cameron and her brother Douglas, a cancer researcher in Colorado.

Meanwhile, in the Andromeda nebula, Alcoreth is a self-aware mass of undifferentiated protoplasm occupying the entire surface of a planet. Facing starvation, she decides to convert her mass into countless spores and launch them into space to seed other planets. After millions of years, a cloud of spores from Alcoreth reaches Earth and comes to rest on the surface of the Atlantic Ocean. Eight months later, ships begin disappearing from the Atlantic and the world's trade is paralyzed. Then Alcoreth invades the East Coast of North America, consuming everything in her path.

Standish learns that Mary is in New York City, and he flies off to rescue her. Mary becomes trapped at the top of Columbia University's new 100-story skyscraper campus building, with Alcoreth eating away at its foundations . . .


* * *
All this time the yellow sport plane had been rushing across the continent, sliding down the radio beacon from New York. Intent on the path ahead, the two leather clad figures bent over the dashboard. No talk, for the muffler had been cut for greater speed. No talk, but the thoughts of the two were identical. "What's happening in New York? What's happening to Mary? Is she safe?" Over and over these thoughts reiterated themselves in the weary brains. These two great scientists, in whose intellects lay perhaps the saving of the world, had forgotten everything save that wisp of a girl in New York, sister of one and sweetheart of the other.

At last the Appalachians appeared, passed beneath them, fell away behind them. Night had come. Donald who had yielded his place at the stick to Cameron, suddenly clutched his companion's arm and pointed ahead. On the horizon there pulsated a greenish glow. Standish's mind flew back to that star in Andromeda, whose passing he had watched months before. Here again he saw the light whose components he had analyzed in his gas spectroscope! The plane was headed directly for New York, and straight ahead of them the luminescence was at its brightest!

Ten minutes now, and they were circling over the great city. From the bay to Westchester, from the Palisades east to the sea, the city was invested. As far north as the ridge of giant erections about 42nd Street the smooth expanse of the phosphorescent sea told of the progress of destruction.

Cameron reached for the lever which silenced the roaring exhaust of the twin engines.

"If only we're in time; if only she is still in my lab. I'm going to go past the windows and see."

Throttled down to its slowest flying speed, the little plane dipped gracefully past the doomed tower rising high above the glowing rectangle of the park. Not twenty feet from the tower it glided. And there, in the window which both men sought so eagerly, was the figure they had hardly hoped would be there!

Up again then for consultation. "Doug, how close can we get to that window?" "I'll get within a foot, or we'll all go to hell together." "Then do it, and I'll get her out, but first tell her what we plan. Get a flashlight; she knows the Morse Code. Remember how I used to signal her in the old days?"

"A long slow glide now, about 500 feet away, lucky that your window faces the park." Cameron obeyed, while the astronomer flashed his dots and dashes. "On the sill, ready to jump." A wave of the brave little hand signalling understanding. Then up again.

Up to 5000 feet and a mile away. Then while Standish creeps out to the end of the wing, the motor is shut off and a long glide begun. Down, on a long slant, straight for that pinnacle rising sheer ahead. Down, ever down, with increasing speed hurtles the plane. A miracle of accurate steering, another miracle of perfect timing, and sheer muscular strength are required. Stark courage from all three, or the gallant attempt at rescue must end in disaster. Will they, can they do it? Too near -- and a crash; too far and a new attempt cannot be made. For see, already the great tower sways with approaching dissolution. 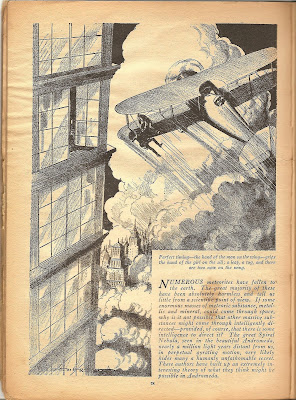 Perfect aiming, the plane almost grazes the side of the tower. Perfect execution -- a hundred feet from the window on whose sill Mary stands, one hand clinging to the sash, the other outstretched; the ship dips, then suddenly rising, almost stalls directly opposite the opening. Perfect timing -- the hand of the man on the wing grips the hand of the girl on the sill; a leap, a tug, and there are now two on the wing. Frantically Cameron works at the controls; frantically the lovers cling to the taut surface of the fabric on which they sprawl. Overbalanced, the craft reels drunkenly. Then the roar of the motor, the wings grip the air, and all is safe.

As Cameron zoomed upward, the hundred-story University rocks in ever-widening arcs; then slowly, slowly it begins to fall. Intact, entire, as it had for so short a time soared over the City, so it falls. Slowly at first, then with gradually increasing speed the great structure falls, until with a rush almost too fast for the eye to follow, it crashes into the lucent tide.

Into the little cockpit tumble the lovers, trembling, exhausted with their supreme effort. Cameron too, is trembling, but he must guide the ship with its precious freight. Westward now they turn, westward through the horrible night.

And now for the first time, they can look about them and take stock. The air is thick with darting planes, fleeing westward from the scourge. Below them not a house that is not ablaze with light, not a highway that is not jammed with rushing conveyances, not a railroad which is not crammed with hurrying trains, westward every one. Looking behind, from north to south, in the wide sweep which their height of 7000 feet allowed them, nothing but that terrible spectral green light, nothing but that immense sea, not of water, but of all-devouring jelly, come across that vast infinity of interstellar space to harry the earth and conquer it. And overhead the black velvet sky, and the stars, gleaming still in the wide arch of the heavens as they did when Earth was a whirling mass, as they still shall when this ball is nought but a cold, dead thing.

"Switch on the communication receiver C; let's hear what the news broadcast says."

"The entire eastern coasts of North and South America are now completely covered with the jelly. Extent of the investment from ten miles to twenty-five. Spain and southern France are being slowly covered; the rest of the western coast of Europe penetrated only from a mile to five."

"The scientific conference is still in session. No solution has as yet been arrived at, but the chairman wishes to announce that the people of the earth need not despair; progress is being made. Donald Standish, the noted astronomer, is still unaccountably missing. It is requested that any one having information as to his present location communicate at once with 2 AG, the government intelligence station."

"Dear, if you had gone, the rest of the world could have followed for all of me. But now, now that you're safe, we must get back. I've got a hunch that Doug and I together can arrive at the right thing to do. We can't land now. Once down in that mob we'd never be able to take off again. Besides, neither of us can think straight just yet; too much has happened in the last thirty hours. We'll soon be home now, and we'll get busy. Drive her, Doug."

Now the sun had overtaken them and a new day was begun. Close ahead rose the peaks of the Rockies, among them the mountain on which perched Cameron's wilderness laboratory. A long spiral, and the little ship of the air dropped gently on the landing field at its door.

The passengers debarked stiffly from the flight plane, then Douglas taxied it into the hanger. Emerging promptly, the three of them entered the house.