I Robot: To Obey by Mickey Zucker Reichert 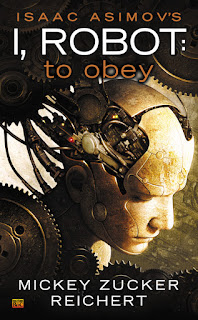 Six years ago, Susan Allison, editorial director of the Penguin Group imprint Berkeley Books, announced that the estate of Isaac Asimov had authorized Berkeley to publish a prequel trilogy to Asimov's classic I, Robot story collection by fantasy author Mickey Zucker Reichert. The announcement stated that the first book in the trilogy, tentatively titled Robots and Chaos, was due to be delivered by Reichert late the following year. The book was finally published by Penguin's ROC imprint in November 2011 under the title I, Robot: To Protect. I posted a review of the book on February 13, 2012, three months after publication, because it took me that long to find the time to read it and write a review.

I liked To Protect. Despite numerous changes to the background established by Asimov in the original collection, Reichert stayed true to Asimov's theme of how the Three Laws of Robotics would operate in a world where robots were constrained by a built-in set of moral precepts, but their human creators were not. Reichert introduced Susan Calvin, a first-year psychiatry resident at a teaching hospital in Manhattan, and the daughter of noted roboticist John Calvin. The story followed Calvin as she dealt with various medical cases; befriended Nate, an android built by her father; and uncovered a terrorist plot by a group of anti-robot fanatics.

The second book in the trilogy, I, Robot: To Obey, was published by ROC in September 2013. It is a mark of how hectic my life has become that I am only now getting around to writing a review of it. Sadly, it wasn't worth the wait. Reichert more or less abandons her examination of the Three Laws in To Obey in order to write a MacGuffin-driven thriller. And the worst thing is, it's a completely senseless MacGuffin. In order to demonstrate how senseless, I'm going to have to spoil the novel's plot. It's okay, though, because the plot deserves spoiling.

When Susan Calvin comes home one day to discover that her father has been killed and decapitated (not necessarily in that order), she is plunged into a harrowing ordeal in which no less than two ruthless groups are determined to kidnap and/or kill her: the first is the group of anti-robot terrorists from the first novel, and the second is some sort of hit team from the Department of Defense. Both groups believe for no good reason that her parents designed an off switch for the Three Laws of Robotics. Anyone who knows a particular code phrase can recite it, and any positronic robots within hearing will have their Three Laws switched off, allowing them to be used as merciless killing machines. Even though Susan's parents always insisted that the Three Laws were intrinsic to the positronic brain, the terrorists and the DoD hit team both believe that they were lying, that John Calvin knew the switch-off code, and that he taught it to Susan. After her father's death, Susan discovers that he left her a secret message encoded in a pair of smartphone-type devices: apparently there was a switch-off code after all, and Susan has to spend most of the novel risking her life in order to retrieve it. When she does retrieve the smartphones and decode the secret message, it says . . .

There's some other stuff going on in To Obey, professional trouble and romantic trouble for Susan Calvin, but it all pales in comparison to the gratuitous MacGuffin plot. I'm frankly wary about what Reichert is going to do in the last book of the trilogy, which will be called I, Robot: To Preserve, and which is due out next February. Maybe she'll go back to focusing on the Three Laws. Maybe.
Posted by Johnny Pez at 11/02/2015 07:10:00 AM