Sobel Wiki: A Study in Manipulation 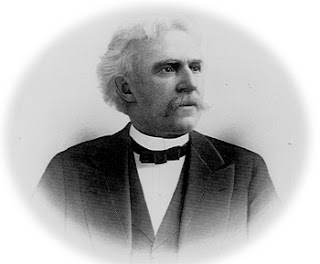 This month's featured article at the Sobel Wiki is on the Age of Renewal, an era in the history of the Confederation of North America. The era gets its name from a speech given by Governor-General John McDowell in October 1882 that marked the start of his re-election campaign.

McDowell is one of the most ambiguous figures in Sobel's alternate history. Most of the national leaders we encounter are acting from clear motives, whether good or bad. Henry Gilpin wants to conquer Mexico; Emiliano Calles wants to abolish slavery; Pedro Fuentes wants to bring Kramer Associates under control; Bruce Hogg wants to maintain North American neutrality in the Global War. But with McDowell, we're never quite certain whether he really is the dedicated reformer he claims to be, or whether he's cynically exploiting the reformist impulse at large in the country to keep himself and his party in power.

Sobel notes the ambiguity several times in his account of McDowell's career. When McDowell unexpectedly finds himself in command of a plurality of the seats in the Grand Council in February 1878, he refuses to consider any proposals for a coalition with one of the other parties. In the end, McDowell is able to gain a majority thanks to crossover votes from the other two parties, and he claims that "I come to this office without a single pledge to any man." Sobel notes that McDowell knew full well that he was the only viable choice for governor-general, and so had no need to cut any deals. Thus, he won a reputation for honesty without running the risk of losing the race for governor-general.

In his first two years in office, McDowell passed a series of reform bills that "did much to quiet Coalition demands," as Sobel puts it. However, most of these bills lacked effective enforcement provisions, so that the abuses they were meant to curb continued. Thus, as Sobel again notes, McDowell achieved a reputation as an opponent of abuses by big business without having to pay the price of pushback by the business interests.

The highlight of McDowell's time in office was the Age of Renewal speech which gave his administration its leitmotif. McDowell proclaims in his speech that "Every North American has the right to hold a job, to a fair wage, to a fair return on his investment, to a decent place in which to live, to security in his home, to the knowledge that his government knows of his needs, and is prepared to help him help himself." However, when he was asked to clarify his statements afterwards, he, as Sobel puts it, "evaded questions on this and related points, deliberately leaving himself as many options in the future as possible." Sobel concludes that "The Age of Renewal was not, as was believed at the time, a blueprint for a new society, but rather a catch-all for any future programs the Governor-General might deem necessary."