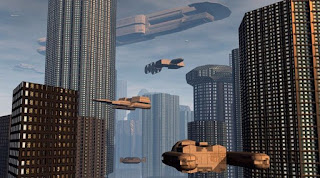 Yesterday, I blogged about the planet Trantor from Isaac Asimov's Foundation series, and noted that my friend Christina is right when she points out how terribly underpopulated it is for a supposedly planet-wide urban area.

One issue that Christina doesn't mention, and Asimov didn't either, is the question of just how the people on Trantor found their way around the place. Trantor is supposedly a single city with an area of 75,000,000 square miles. Let's say you're a tourist visiting the planet. Like Gaal Dornick, you can take a taxi from the spaceport to the nearest hotel and book a room. And then?

Asimov never showed any of his characters trying to find their way around the planet. Dornick didn't have to bother, because he was escorted everywhere on the planet by government agents, or by Hari Seldon. When Lathan Devers and Ducem Barr visited the planet two centuries later, we never saw them navigating the world. We just cut from the two of them standing in a terrace outside the spaceport to the two of them meeting with a bureaucrat in his office. Then, after the bureaucrat tries to arrest them and Devers kills him, we cut again to the two men back in the spaceport hanger where their ship is docked. And so they leave Trantor. Finally, there is Asimov's 1988 penultimate Foundation novel, Prelude to Foundation, in which Hari Seldon visits Trantor for the first time, and ends up settling there. At one point early in the novel, Seldon finds himself sitting in a park, but Asimov never indicates how he made his way there. Other than that, Seldon, like Gaal Dornick, is escorted everywhere on Trantor by various people who know where they're going and how to get there.

This is not to say that nobody has considered the question of how to navigate a planet-wide city. In Harry Harrison's 1965 novel Bill, the Galactic Hero, the title character visits a Trantor-like planet-city called Helior. Bill makes his way through Helior by carrying a street atlas the size of a Gutenberg Bible. Bad things happen to Bill when he nods off and his atlas is stolen, leaving him lost and incapable of making his way back to his barracks. Donald Kingsbury's 2001 novel Psychohistorical Crisis is an Asimov pastiche set after the formation of the Second Galactic Empire. The Second Empire's citizens use symbiotic computers to augment their memories, allowing them to access built-in GPS systems to guide them around the world-city of Splendid Wisdom. One character who has had his symbiotic computer destroyed is able to manage by using an old-fashioned Google glass-type device to project navigational information onto his retina.

And, hey, as long as we're on the subject, here's the Talking Heads with "Road to Nowhere".

I suppose you could just have white courtesy phones to travel agents at every bus stop and railroad station.