Carnival of the Liberals #89 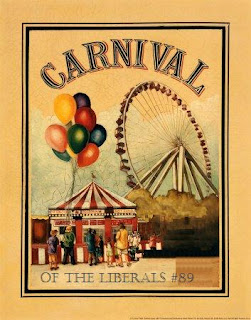 Welcome back, my friends, to the show that never ends! It's the 89th edition of the Carnival of the Liberals, the fortnightly best of the left blogosphere, coming to you live and direct from the streets of Newport, Rhode Island here at the Johnny Pez blog.
I'd like to thank everyone who participated . . . my inbox may never be the same. Two weeks is too short a time to spend among such excellent and admirable bloggers. I know less than half of you half as well as I should like, and I like less than . . . hold on a moment.
Sorry. Wrong speech. Just a second . . . ah, here we go. Ahem.
When in the Course of human events it becomes necessary for one blogger to assume among the powers of the blogosphere the separate and equal station to which the Laws of Nature and the Flying Spaghetti Monster entitle him, a decent respect to the opinions of mankind require that he should declare the causes which impel him to host a blog carnival.
I hold these truths to be self-evident: that all blogs are created equal, that they are endowed by their creators with certain unalienable Attributes, that among these are Relevance, Wit, and the pursuit of Page Views. That to display these attributes, Blog Carnivals are instituted within the Blogosphere, deriving their just powers from the consent of the participants.
To prove this, let Blog Posts be submitted to a candid world.
Speaking of Submitted to a Candid World, do you remember back in 2005 a few months after Bush's second inauguration when Bernie Sanders defended Vermont's right to secede from the United States? No? Well, maybe that's because he wasn't crazy. But Ron Paul is, as Ames reveals in "Are You Smarter than a Sitting Congressman? Ron Paul Edition".
Next comes Melanie Pinkert of the BroadSnark blog, who dares to ask the forbidden question: what's so bad about collective action? She gives the question a good solid, erm, questioning in her post "Individual Effort vs. Collective Action".
Jill at The Barefoot Badger gives a quick history of how General Motors eliminated electric trolleys (and incidentally crippled America's public transportation system) in order to clear the way for their cars in "The Murder of Public Transportation in the United States".
Doctor Biobrain at American Nihilist welcomes MSNBC host and torture enthusiast Joe Scarborough to the ranks of the nihilists following Morning Joe's call for a comparison between torture and nuclear fireballs in "Media Hero of the Day: Joe Scarborough".
Martin at the UK blog The Lay Scientist brings word of an epic battle between a fundie group called Christian Voice and Britain's Advertising Standards Authority in "Christian Voice, the HPV Vaccine and Freedom of Speech". Apparently it's considered unacceptable in the UK to lie in advertisements, proof (as if more proof were needed) that Old Europe is sunk in tyranny. Although I'm disappointed that Martin didn't title his post "Help! I'm being repressed!" I'm including it here anyway.
GrrlScientist is Living the Scientific Life, and brings to our attention "HR669: The Nonnative Wildlife Invasion Prevention Act". Although HR669 seems like a much-needed and environmentally friendly bill, GrrlScientist fears the bill is both grossly misguided and poorly thought out, and explains why.
More scientific goodness comes from Eric Michael Johnson of The Primate Diaries. Johnson points out in "Male Chauvinist Chimps or the Meat Market of Public Opinion?" that establishment media outlets were too eager to make sexist jokes to pay attention to the actual findings of a study examining meat sharing by chimpanzee hunting parties.
Greta Christina of Greta Christina's Blog responds to the teabaggers' incessant, eternal whining about taxes by writing "In Praise of Taxes" and sounding about a hundred times more sensible and mature than any teabagger has managed to do. So put that in your teabag and smoke it!
Paul Sunstone of Café Philos blogs about fellow blogger Bill of Earthling Blues. Bill has very cleverly taken some Mormon propaganda directed against gays and inverted it to produce some gay propaganda directed against Mormons in "Helping Those With Mormon Interests".
Finally, "Mad Madeleine" Kane of Mad Kane's Political Madness takes a hard, gut-wrenching look at what may well be the most important political story of our time: America's new First Puppy. Learn about the searing details (plus limerick) in "Dogged Journalism".
And that concludes Carnival of the Liberals #89. If you've enjoyed reading these posts half as much as I've enjoyed presenting them, then I've enjoyed them twice as much as you. And hey, as long as you're here, why not look around the Johnny Pez blog and see what there is to see? In addition to my own insightful political commentary, there's my daring vision of an alternate world with no Hitler, my conservative version of Superman, a couple of really old public domain science fiction stories that you'll find nowhere else on the internet, and the usual odds and ends you'll find on any blog.
And if you're saying to yourself, "Why, I could do a better job of running a blog carnival than that doofus," then I encourage you to try. In fact, I dare you! I double-dog dare you! Go ahead and tell Leo Lincourt that you want to host the Carnival of the Liberals, just to show that Johnny Pez joker how it's done! In fact, there's an open spot coming up on May 20. Go ahead and volunteer for that one, just to rub my nose in it! That'll show me!
The next edition of Carnival of the Liberals will be hosted at the Quiche Moraine blog on May 6, 2009. Hope to see you there!
Posted by Johnny Pez at 4/22/2009 11:59:00 AM

Labels: Carnival of the Liberals, Politics

Hmm, nothing made the Top 10 about Obama torture apologetics, defense of not prosecuting torturers (who were pushing to torture more even BEFORE the Bradbury-Yoo-Bybee okey-odkey....

Guess no news about that was blogged about in the last couple of weeks.

For more on the latest developments on this issue, I humbly suggest one of my blog posts, written by someone who refuses to sign any more “Holder, appoint a special prosecutor” petitions until the people who create those petitions agree with me to support liberal third parties and third-party candidates.

I love the smell of purity troll in the morning. Smells like . . . victory!