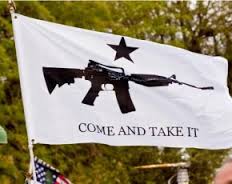 Details are starting to emerge about the couple that went on a shooting spree in San Bernardino, California yesterday. One of the shooters was a quiet, devout county health inspector named Syed Rizwan Farook and the other was his domestic partner and the mother of his child wife, Tashfeen Malik. From what we know so far, Farook was apparently an honest, liberty-loving American who enjoyed exercising his Constitutional right to purchase and own firearms and create his own home-made remote-control-detonated pipe bombs.

Although much remains to be determined, it is clear that Farook was made the victim of Political Correctness at a holiday party he was attending along with his co-workers, and he courageously chose to Stand His Ground by applying a Second Amendment remedy to the matter. Malik demonstrated her womanly devotion to her man by standing by him during his time of trial and assisting him in implementing his Second Amendment remedy.

Afterward, the two were apparently betrayed by a freedom-hating statist who alerted the government to their whereabouts. This resulted in an appalling exercise of government overreach as officials confronted the couple in their home (or at any rate, a home), as far as we know without a warrant. The couple then once again courageously Stood Their Ground by exercising their Second Amendment rights, until they were killed by agents of the state. It can truly be said of Farook and Malik that the government was only able to take their guns from their cold, dead hands.

Meanwhile, as far as the shooting spree in Savannah, Georgia (remember that?) is concerned, we don't yet know the shooter's race, so we can't say for certain whether he was also a courageous American who was Standing His Ground, or a dangerous thug.

UPDATE: Latest report confirms that the two Patriot American Second Amendment Heroes in San Berdoo were an actual married couple and not just sinfully shacking up together. Blog post updated to reflect this important new information.
Posted by Johnny Pez at 12/03/2015 02:47:00 PM