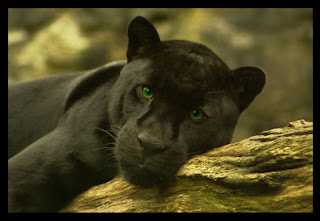 The first uplifted animal we encounter in The Island of Doctor Moreau is M'ling, who had accompanied Montgomery on board the Ipecacuanha on the alcoholic doctor's annual expedition to acquire more animal subjects for Moreau. He had assisted Montgomery in carrying Prendick out of the boat he had been marooned in, though Prendick had been delirious at that point and had no reliable memory of the event. Prendick first encounters him in chapter III, "The Strange Face":


He was standing on the ladder with his back to us, peering over the combing of the hatchway. He was, I could see, a misshapen man, short, broad, and clumsy, with a crooked back, a hairy neck, and a head sunk between his shoulders. He was dressed in dark-blue serge, and had peculiarly thick, coarse, black hair. I heard the unseen dogs growl furiously, and forthwith he ducked back,—coming into contact with the hand I put out to fend him off from myself. He turned with animal swiftness.

In some indefinable way the black face thus flashed upon me shocked me profoundly. It was a singularly deformed one. The facial part projected, forming something dimly suggestive of a muzzle, and the huge half-open mouth showed as big white teeth as I had ever seen in a human mouth. His eyes were blood-shot at the edges, with scarcely a rim of white round the hazel pupils. There was a curious glow of excitement in his face.

The catastrophe that the title of chapter XVII refers to occurs at least eight weeks, probably more, after Prendick arrives at the island, which would put it in April or May of 1887. Prendick has risen early, eaten breakfast, and is smoking a cigarette while standing outside the open doorway of Moreau's compound. He sees --

Hang on, let's pause a moment. How does Prendick come to be smoking a cigarette? He had absolutely no possessions when he arrived on the island. Even his clothing consists of Montgomery's hand-me-downs (which don't fit well, since Montgomery is several inches taller than Prendick). Everything he consumes presumably comes from supplies that Moreau sends Montgomery to fetch on his annual excursions, except perhaps for whatever food grows on the island. If there are cigarettes on hand for Prendick to smoke, it can only be because one of the other two men is a smoker and has generously allowed Prendick to poach on his stash. Prendick doesn't seem to do anything on the island to earn his keep, even though Moreau only let him stay because of his scientific training. Prendick himself admits, "I spent an increasing proportion of my time upon the beach, looking for some liberating sail that never appeared." It's no wonder if Moreau is getting annoyed at having this freeloader mooching off of him.

Anyway, one day in late April or early May of 1887, Prendick is hanging around the entrance to the compound smoking one of the other men's cigarettes, and he sees Moreau walk by, they greet each other, and Moreau goes in and unlocks the door to his laboratory. After all this time, he's still working on a puma that Montgomery brought to the island on the Ipecacuanha. Prendick continues to stare out to sea while behind him the puma "met its persecutor with a shriek, almost exactly like that of an angry virago."

The puma has had enough of this shit. She manages to pull the chain binding her from the wall it is attached to, knocks down Moreau, and runs out of the compound, knocking Prendick out of the way as she does do. Prendick suffers a broken forearm and falls to the ground, where he watches the puma, "swathed in lint and with red-stained bandages fluttering about it," run off. Moreau, armed with a pistol, chases after the puma, and the two disappear inland into the island's foliage.

Prendick painfully regains his feet, and Montgomery appears, also armed with a pistol. Prendick explains what he saw while Montgomery sets his broken arm and puts it in a sling. Then Montgomery goes off in search of Moreau and the puma, while Prendick paces back and forth by the compound.


“My God!” The man was panting, almost sobbing. “Go back in,” he said, taking my arm. “They're mad. They're all rushing about mad. What can have happened? I don't know. I'll tell you, when my breath comes. Where's some brandy?”

He tells Prendick that he has been unable to find Moreau or the puma. While he was searching, he was joined by M'ling, who had been out with a hatchet chopping wood. The two went to the village of the uplifted animals, and found it deserted.

Chapter XVII ends with Prendick asking, "What does it all mean?" Montgomery can only shake his head and down some more brandy.

Clearly, all is not well on the island. It sounds as though something has happened to cause the uplifted animals to reject Moreau's Law and revert to their natural states. Moreau's hunt for the escaped puma seems like the proximate cause. Did the puma attack and injure him? And would that break the hold that Moreau exercises over them? Tune in tomorrow for chapter XVIII, "The Finding of Moreau".
Posted by Johnny Pez at 12/05/2015 05:14:00 PM

Labels: The Island of Doctor Moreau

VaporFi is the highest quality electronic cigarettes provider on the market.