Ever since we were married, my wife has always insisted that we must eventually get a puppy. By the early months of 2004, we were approaching our sixth wedding anniversary, and apparently the sixth is the puppy anniversary, because my wife said that the time had come. She went looking online for the perfect breed of dog, and she finally decided that we had to get a basenji, because, in addition to being clean and rather on the small side, basenjis didn't bark. My wife had had more than her fill of barking dogs in the house back when her sister lived with us, and when she found out about these barkless dogs, she said, "That's the dog for us."

Our search for a basenji puppy led us here and there, and finally brought us to North Attleboro, Massachusetts, the location of Eldorado Basenjis, one of the top basenji breeders in New England. They had a litter of puppies ready for adoption, and as we sat in the living room at Eldorado Basenjis, my wife asked me which of the dogs I liked. All the puppies were of the red-and-white variety, and I finally decided for no good reason that I would like a dog with as much red and as little white as possible, so I picked out a puppy named Eldorado's Forever Amber (all the puppies in the litter were given "amber" names), and that was the puppy we brought home with us. My wife had no intention of referring to our new basenji as "Forever Amber", though, so the puppy was given the name Kleopatra Selene, after the daughter of the Queen of Egypt. 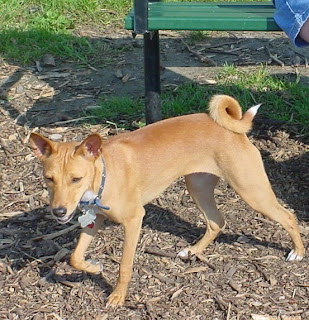 Klea had the usual puppy traits of being active, bouncy, and too cute for words. Even when she wasn't being active and bouncy, Klea always remained cute. 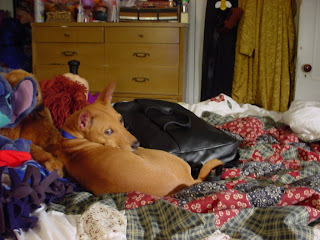 We had always been a cat household up until Klea's arrival, and our two cats didn't know quite what to make of her. Kali, the elder cat, finally decided that Klea must be an oversized cat, and she proceeded to ignore her as she would any other cat. However, Kali may have had premonitions concerning Klea's arrival, and they proved to be accurate. 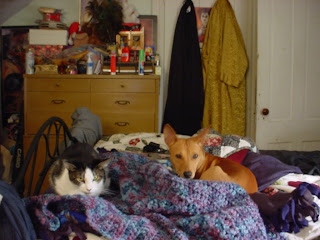 Shortly after the new year 2005 began, my wife decided that Klea needed some canine companionship. She had begun looking online for another basenji to adopt, when we suddenly heard from the director of the New York State chapter of Basenji Rescue and Transport, aka BRAT, the national basenji breed rescue organization. It seemed there were two elderly basenjis in upstate New York that needed a new home, fast. They were eleven years old, had been together their whole lives, and both suffered from diabetes. They were not littermates, though they had a common father and had been born two weeks apart. Their names were Zane and Zoie. 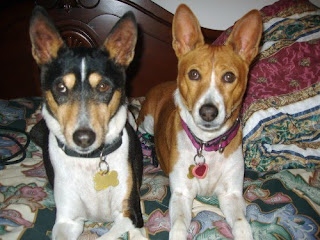 Their owners were getting divorced, and neither one could care for the dogs. They were moving out of their current home in one week's time, and if no home could be found for Zane and Zoie by then, they would have to go to the animal shelter. The lifespan of a diabetic eleven-year-old dog in an animal shelter would be measured in the days, so their lives were hanging by a thread.

We had anticipated getting one dog, not two, and caring for diabetic dogs, with their need for regular insulin injections, would be a challenge. In the end, though, we decided that someone had to rescue Zane and Zoie before it was too late, and that someone was going to be us.

The logistics were going to be tricky. The New York BRAT director would be picking up the dogs from their current home, but she couldn't travel all the way to Newport. One of us would have to meet her halfway. I was working two jobs at the time, but I had a thirty-six hour period when I had off from both, on the 12th and 13th of January. In the end, my wife decided to come with me, so we booked a room at a motel in Lee, Massachusetts, near the New York state line, for the night of the 12th, and arranged to meet with the director at noon on the 13th in the parking lot of a McDonald's just off of Interstate 90.

January 2005 was a snowy month, and after dropping Klea off at my mother-in-law's house in Portsmouth, we went through intermittent snow showers all the way up Interstate 90, which is not the way you want to encounter an unfamiliar road. The snow became steady by the time we left the Interstate around 10 P.M., and a couple inches had piled up when we reached the motel in Lee. When we woke up in the morning, we found about eight inches of new snow on the ground. After spending the morning visiting Hancock Shaker Village (because my wife finds the Shakers fascinating), which looked particularly picturesque among the new-fallen snow, we made our way back to Lee for our rendezvous at McDonald's. The meeting went off without a hitch, and there in the snowy parking lot we first met Zane and Zoie.

Due to a miscommunication somewhere, we were given to understand that Zane was the red-and-white dog and Zoie was the tricolor, and I remarked on the odd fact that Zoie seemed to have a penis. We brought the dogs back with us to Rhode Island, stopping first at my mother-in-law's house to give Klea her first meeting with her new housemates. We figured the dogs would get along better at a neutral meeting ground than they would in our house, but there still seemed to be plenty of dog-meets-dog hostility. We expected Klea to get along better with the male than with another female, and we were surprised to find her growling more often at "Zane" than at "Zoie". I was away at work when my wife finally realized that Zane was actually the tricolor basenji and Zoie was the red-and-white.

After a week or so of growling and snarling, the new housemates finally settled down and learned to live amicably with one another. 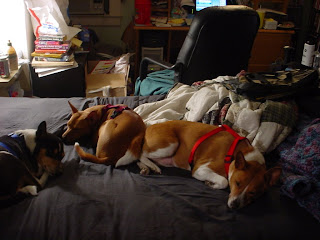 My wife and I quickly became adept at giving our new dogs their twice-daily insulin injections, and mealtimes for all three dogs were arranged to coincide with them (and with the pills that Zoie required to treat her Cushing's disease). Trying to walk all three dogs at the same time through the streets of Newport would have required more dexterity that I possessed, so I tended to walk the older dogs together and then Klea separately. I would also take the three of them together to Newport's no-leash dog park, where they could wander about and fraternize with the other dogs, though the older dogs tended not to do much wandering.

2005 was winding down when Zane started to develop a cough. There was nothing that could be done about it; his body was finally starting to give out. His coughing slowly grew worse and he became steadily weaker until he experienced a sudden crisis at the end of February 2006 and passed away with my wife in attendance while I was away at work. I was weeping when I took his body to the Newport Animal Hospital to be cremated. My wife put the wooden box with his ashes on top of her dresser.

Zoie's lifelong companion was gone, but she still had Klea to keep her company, and the two dogs became friendlier. 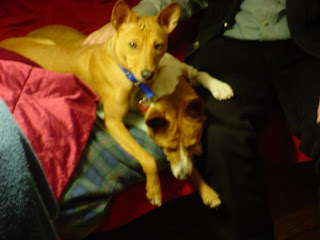 Then, a couple of weeks after Zane's death, my wife heard from the owners of Eldorado Basenjis. They had heard about Zane's passsing, and they had a proposition for us. Six months before, they had had a puppy returned to them. His name was Eldorado's Dark Red N Ready, and his owners had named him Louis. He was actually related to Klea -- Klea's mother was Louis' half-sibling, making Klea his niece, though Louis was born a year after Klea. Louis' owners hadn't taken very good care of him, and they returned him to Eldorado Basenjis when they got divorced. Since we had just lost a dog, would we be intersted in adopting Louis? 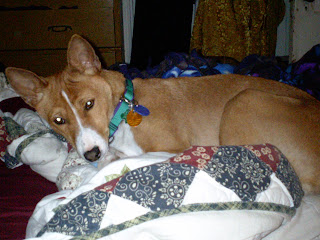 My wife convinced me to drive up to Massachusetts and meet Louis. We brought Klea and Zoie along, and the three dogs spent some time getting to know each other in a fenced-in area outside. Klea in particular seemed to enjoy his company, so I finally agreed that we should become a three-dog household again. 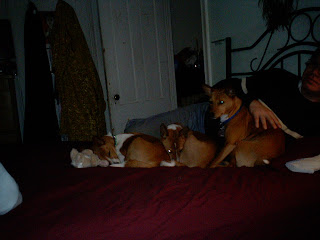 The new pack of Klea, Zoie, and Louis (whom my wife quickly nicknamed Woo) got along well, though Zoie preferred to spend her time apart from the two younger dogs, and due to his unhappy puppyhood Woo found confinement to a crate unpleasant. Our routine remained much the same as it had been, with the three dogs getting daily visits to the dog park, and the occasional walk together late at night when I didn't have to worry about handling three dogs among the traffic-filled streets.

In November, though, Zoie suddenly stopped eating; the diabetes and the Cushing's had finally worn her out, and on the day before Thanksgiving we took her to the Newport Animal Hospital and she was sent to her rest. We had her body cremated, and her ashes now rest in the same wooden box as those of her lifelong companion Zane. 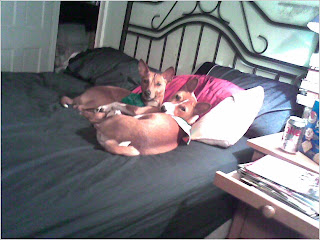 Now it's just Klea and her uncle (and kid brother) Woo. They're playing on the bed behind me even as I write this, and soon we'll be going together to my mother-in-law's house for Thanksgiving dinner, where they will spend much of their time stealing food from my mother-in-law's black lab and haunting the kitchen where dinner is being prepared. My wife occasionally talks about adopting another dog, but Klea and Woo form such a happy, stable pair that I'm reluctant to introduce another dog into the mix; and there's no denying that walking two dogs is much easier than walking three.
Posted by Johnny Pez at 11/26/2009 08:17:00 AM

I love this story! I often consider getting another dog for Jess since I work all day she is home alone a lot! Your dogs are adorable, I love how they cuddle together!

This is a terrific story that is really heartwarming. And your dogs are *gorgeous*, just gorgeous. Makes me want to go out and get a dog right. now.

OK, I admit that I went straight for the 'pets' tag because I wanted to hear more about the basenji in your profile pic -- only to find that there were many, many basenjis there! Thanks for posting these 'origin' stories. So lovely that you and your wife were able to take in the diabetic seniors, and give them love up to the end.

We find a 2-dog household to be just right for now, but I'm working on the Doggy Daddy to see if we can be a foster home for other doggies in need. So maybe sometimes we'll be a 3-dog house too (it's happened before, with a houseguest!), maybe sometimes not.